Lock Sam Skinner takes the acclaim of his Exeter Chiefs team-mates after scoring the second of his two tries in the Gallagher Premiership win over Bath Rugby. Picture: Getty Images

Mark Stevens at the Recreation Ground

Exeter Chiefs not only rediscovered their winning formula, but at the same time underlined their champion credentials with an all-conquering performance against rivals Bath in the Roman City.

For the first quarter at least it looked as though recent top-flight troubles were continuing for Rob Baxter’s side as they slipped behind to a converted Ruairdh McConnochie try and two penalties from Rhys Priestland.

However, the Devonians soon stirred into life and by the break were only a point adrift as Tom O’Flaherty raced over, quickly followed by Sam Simmonds who continued his rich vein of scoring form with his 13th of the campaign.

Although Bath drew first blood again in the second period, Priestland landing a third penalty of the day, it was the visitors who used their own SAS to propel them to victory on enemy soil.

Sam Skinner found his way over for a brace, the first of which was set-up by Sam Simmonds, before late scores from Jonny Gray and O’Flaherty wrapped things up.

Keen to get back to winning ways following narrow defeats to Northampton Saints and Sale Sharks, the Chiefs - buoyed by the return of international trio Gray, Stuart Hogg and Tomas Francis - looked to set the early tone. 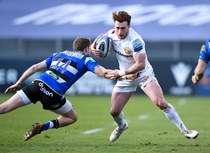 Jack Innard, making a rare start in place of suspended club captain Jack Yeandle, led the initial charge, backed up by fellow forwards Skinner and Alec Hepburn, who made decent inroads into the Bath half before being turned over on the floor by England international Sam Underhill.

Threat averted, it was the home side who turned defence into attack forcing former Bath favourite Ollie Devoto - on his 100th Premiership start - to concede an eighth-minute penalty which Welsh fly-half Priestland stroked over with ease.

Minutes later and Priestland was conjuring up the opening for Bath to claim the game’s opening try. Sat back in the pocket, the gifted playmaker looked up, took aim, before delivering a pin-point, cross-field kick that McConnochie plucked from the air ahead of O’Flaherty and Jack Maunder before dotting down.

Priestland slotted the testing touchline conversion before extending his side’s lead further with a second penalty. Again, the lethal marksman - who has now not missed in a league record 35 consecutive shots at goal - punished the Chiefs for some sloppy indiscipline.

The first quarter hadn’t even elapsed, but already the Chiefs were 13 points down and looking somewhat shell-shocked.

To their credit, the visitors quickly awoke from their slumber and for the remainder of the half, they dominated not only territory but, more importantly, possession.

Keeping ball in hand, they started to work through their playbook, stretching the hosts left, than right, before striking for the first time on 29 minutes. Having won a penalty, skipper Joe Simmonds drilled the kick into the left-hand corner.

Afforded prime position to strike, the ball was worked off the top into the hands of Maunder, who sniped round the set-piece before delivering a well-timed pass into the grasp of O’Flaherty, who on the charge barged his way over the Bath line for the score, converted by Simmonds.

Up and running at last, the Chiefs - who won the corresponding fixture at Sandy Park back in November by a record 40-3 scoreline - added a second just before the half time oranges.

Using their pack to propel them to within sniffing distance of the line, it was the Simmonds brothers who worked in tandem for Exeter’s second, Joe providing the pass for brother Sam to leg drive his way over for yet another touchdown.

In the commentary box, Lawrence Dallaglio - one of English Rugby’s all-time great No.8s - waxed lyrical about the Exeter man.

“If Eddie Jones doesn’t want him, Warren Gatland might be thinking about him,” said Dallaglio, who echoed the views of many that England’s loss is very much Exeter’s gain.

Although the younger of the Simmonds siblings failed with the conversion, the Chiefs were back in contention and very much alive and kicking heading into the turn.

Just as they had done in the first half, the Chiefs came out firing on the resumption. Clearly enthused by their two earlier scores, they pressed hard in a frenetic opening ten minutes.

Bath, however, were holding firm and having soaked up the Chiefs pressure, they trundled back down field, winning a penalty of their own through good work on the floor by replacement Miles Reid. Afforded another shot at the target, Priestland - the Premiership’s deadliest shot - once more hit the mark with another lengthy strike.

With such a threat opposite them, it was imperative the visitors learned from their earlier mistakes. This they did, using the impetus of fresh stock from the bench, to kickstart their latest revival back into the game.

Jannes Kirsten, playing his first game in months following a fractured eye socket, offered a heavyweight force. Props Ben Moon and Tomas Francis were equally impressive, as was scrum-half Stu Townsend whose speed at the breakdown started to get the Chiefs firmly on the front foot.

Having been repelled on the line by some desperate defence from the home side, there was to be no stopping the Chiefs on the hour mark. Sam Simmonds picked from the base of a scrum, drove powerfully towards the line, before Skinner took up the rest of the raid, driving low and hard for Exeter’s third try.

Not happy with one score, Skinner was doubling his tally just moments later, the Scottish international this time rumbling over from close range as he applied the finish to a 15-phase move from the Chiefs to secure the all-important bonus point.

Skinner’s quick-fire double had clearly sunk Bath’s appetite in an instance, but the Chiefs were far from finished and in a dominant final ten minutes, they added two more tries to put the seal on a best-ever win at the famous Rec.

Scottish forward Gray rumbled over for a fifth score, before O’Flaherty grabbed his second of the game, rounding two defenders with one of his trademark bursts.

Mission accomplished, all that was left for the Chiefs to do was to regather the restart and drop it into touch to secure a Westcountry double at a ground where in the past Exeter would often struggle.