Table-topping Bristol Bears may have strode out to the sound of the ‘Greatest Showman’ - but it was defending Gallagher Premiership champions Exeter Chiefs who delivered the star-studded performance.

Returning to Ashton Gate for the first time since lifting the Heineken Champions Cup at the same venue back in October, it was Rob Baxter’s men who pulled the strings in this enthralling top-flight encounter.

Not only did they reclaim Westcountry bragging rights against their nearest and dearest, but at the same time they were able to not only close the gap at the top of the standings, but also give themselves a bit of breathing space over their fellow play-off contenders.

South African forward Jacques Vermeulen was front and centre for the visitors, producing a stunning man-of-the-match display, but there were a plethora of team-mates who were not far behind in collecting the post-match medal.

Sam Simmonds was among that supporting act, producing an equally impressive offering in front of watching British & Irish Lions head coach Warren Gatland.The all-action No.8 was seemingly everywhere during his 60-minute showing, before he exited stage right having rolled an ankle.

Others too did their hopes of being part of this summer’s tour to South Africa no harm at all as the Chiefs followed up their hefty win over Wasps the previous week with another telling performance.

Bristol, who scored first through Andy Uren - and again at the death through Luke Morahan, played their part in this absorbing showdown between the Premiership’s two prized heavyweights. However, those were their two highlights in this brutal slug-fest in which the Chiefs landed all the major blows. 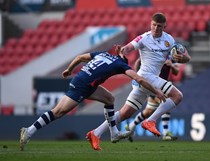 With both sides able to parade a powerful array of talent from the outset, the opening exchanges were largely restricted to some industrious sparring in which neither side were willing to let their guard down.

Both sides tore into each other with a gusto not seen in any other fixture so far this season, but it set the tone for what was to follow on a gorgeous spring evening of entertainment.

It was, however, the Bears who would strike first. Using the deadly Charles Piutau to launch their counter from deep inside their own 22, the former All Blacks star made decent yardage down the right, linking first with Niyi Adeolokun and then Morahan to release Uren on the charge.

Although it appeared the Chiefs had suffocated the Bears scrum-half in a tackle, somehow he was able to shake off the attentions of Tom O’Flaherty, before scampering clear of the cover to break the game’s deadlock.

Hardly the start the Chiefs would have craved, Baxter’s side quickly regrouped and it was not long before they were restoring parity. Sam Simmonds was at the heart of the matter, producing a breakout that the BT Sport pundits registered at 21mph.

‘Obscene’ was how Ugo Monye described Simmonds’ sprint - but it did give the visitors the front foot ball they were so desperately craving. Now with the bit between their teeth, the Chiefs first went left through Jonny Hill, before working the ball back across the field to within sniffing distance of the line.

With their powerhouse pack primed and ready to strike, it was only a matter of time before the Bears defensive dam sprung a leak, allowing Scottish international Sam Skinner to squeeze over for the score in the right corner.

Although Joe Simmonds just slid his testing conversion attempt wide of the far post, the Chiefs skipper made no mistake when he was afforded a second shot at the target, this time ensuring a maximum haul when O’Flaherty crossed for Exeter’s second try on 32 minutes.

This time working the ball off a line-out midway inside the Bears half, Jack Maunder’s pass to Joe Simmonds allowed the Chiefs playmaker to release his brother once again in the wide expanses of the Ashton Gate pitch. With time and space, Simmonds Snr drew in the cover before O’Flaherty cut back inside to bag his side’s second try of the night.

Even then the Chiefs weren’t finished, wrapping up a powerful first 40 minutes - in which they didn’t concede a solitary penalty - with a kick of their own from Joe Simmonds after Ben Moon had got the better of Kyle Sinckler at scrum time in front of his own posts.

For the players at least, the interval could not have come at a better time. It had been a frenetic first half - where literally no one was willing to give an inch. However, any thoughts that the pace of the game would slow on the resumption were extinguished straight from the restart.

Joe Simmonds’ lofted drop-out was almost gobbled up by a rampaging Luke Cowan-Dickie, before Piutau felt the full force of Vermeulen as he looked to counter from deep inside his own half.

Clearly intent on not allowing the Bears any kind of breathing space, the Chiefs continued to apply the pressure. Exeter’s linespeed was relentless, as was their togetherness to double up in tackles and swamp the breakdown at crucial times.

Denying the Bears the opportunity to get any kind of speed into their game was a clear tactic the Chiefs were working too - as was ensuring they were ruthless in attack when the moment came to strike.

True to form, the Devonians didn’t have to wait long to add to their tally, Vermeulen extending their grip on proceedings when he was able to power over from a series of close-range pick-and-go manoeuvres.

With a 15-point cushion at their disposal, the Chiefs were sitting pretty as the game headed into the last quarter. Fresh muscle was sent from the sidelines by Baxter to keep the pace and tempo high as they looked to grab the all-important fourth try.

Twice they squandered five-metre line-out drives, the Bears working collectively to fire a man through the middle of the maul to disrupt proceedings, whilst Stu Townsend did his best to try and snipe through a gap in the home side’s defensive line.

Bristol, though, refused to surrender and with just two minutes remaining, they served up a timely reminder to their rivals that come play-off time they themselves will be amongst the star attractions.

Piutau was again the architect to their final score, producing some nifty footwork and then a ludicrous offload to send winger Morahan over in the corner for the try, converted by replacement Ioan Lloyd.

For the Bears, it was all a little too late. However, expect Pat Lam’s side to be there or thereabouts in the final shake-up where, based on this dust-up, we can expect another meeting of the league’s leading lights.