In the end it came down to the last kick - or should I say - the lack of it as Northampton Saints ended a seven-year wait to win on Devon soil.

Having just crossed for their second try of the game, it was left to Exeter Chiefs replacement Joe Simmonds to try and bag a last-gasp victory for last season’s English and European champions.

Poised to strike what would have been a testing touchline conversion, referee Christophe Ridley allowed the visitors to charge en masse at Exeter’s prized sharp-shooter as he set his sights on a potential match-winning shot.

Ridley, rightly or wrongly, saw nothing wrong as Northampton winger Ollie Sleightholme raced from his own try-line to kick the ball from Simmonds’ kicking tee into the sidelines, ensuring a bizarre triumph for the Midlanders.

Simmonds, along with team-mate Stuart Hogg, argued the case as Ridley blasted out the final whistle. However, their protestations were in vain and it was Chris Boyd’s side who headed back up the road with the four-point bounty.

In truth, the Chiefs have only themselves to blame for not securing a fourth successive Gallagher Premiership win. They held the upper hand for large parts of this contest, positioning themselves within strike range on numerous occasions.

Sadly, Rob Baxter’s side did not have their customary killer instinct on this occasion, allowing numerous scoring opportunities to go amiss, either through a lack of precision or, more often than not, some stubborn Saints defence.

In the end, the Saints took virtually every chance they were offered, Shaun Adendorff crossing for a first half try, which Piers Francis converted to go alongside two second half penalties.

The Chiefs countered with a converted first half try from skipper Jack Yeandle to ensure the scores were tied at seven-apiece at the break, while lock Sam Skinner coasted over in the final minute to set up the late dramatics. It was, however, not enough come the end.

Having secured victories in their last three outings against Worcester Warriors, Newcastle Falcons and London Irish, Baxter stuck with a large nucleus of those who had prospered in those fixtures. Of the two changes he did make, both came in the back division, where Harvey Skinner was afforded his first start of the season at fly-half, while returning Scottish captain Hogg came in at full-back with Josh Hodge switching to the wing in place of the missing Alex Cuthbert.

Saints, who were forced to sit out the action last weekend after a Covid outbreak at the Falcons, made five changes to their side. Behind the scrum, Ahsee Tuala, Matt Proctor and George Furbank all came into the starting mix, as did Ehren Painter and Api Ratuniyarawa up front.

With personnel in place and conditions nothing other than bleak, both overhead and underfoot, it was the Chiefs who had first use of a strong tail wind at their backs.

The early exchanges were nothing more than a macho mud wrestling bout centred around the halfway line, before the Saints struck with their first meaningful foray into the Chiefs 22.

A scrum penalty - awarded against home prop Alec Hepburn - saw Furbank drill the ball into the left corner, setting up an attacking platform for the Saints to work from. Cornishman Sam Matavesi found his line-out jumper - and when the shove came on - it was No.8 Adendorff who emerged from the mass of bodies to take the acclaim for the score, cleverly converted by the boot of Francis.

It was clinical stuff from the visitors, who were then subjected to a heavy home bombardment in attack. Dave Ewers - an on-field monster throughout - led the charge with some heavyweight collisions, while Sam Simmonds did his best to add to his tally of 11 tries for the season.

Both went close, forcing the Saints to scramble under their own posts. Referee Ridley twice warned the visitors about their infringing, threatening further sanction if they were to fall foul of him again. Yeandle tapped twice from close-range penalties, the second of which saw Will Witty cough up the ball with the try-line in sight.

Undeterred, the Chiefs kept coming in attacking waves and when they saw a potential try ruled out by the officials, it was Yeandle who found his way over from another close-range penalty, the hooker propelling himself like an Exocet Missle through three Northampton defenders to score.

Harvey Skinner, banged over the easy conversion, to ensure parity as the interval loomed.

Northampton introduced former England prop Paul Hill into the front-row for the start of the second half, but his first introduction to play was to see himself thrust upwards as the home side pushed their rivals off a scrum.

It gifted the Chiefs a penalty which Harvey Skinner duly drilled into the corner to set-up another five-metre raid. Baxter’s side - sensing their had the bit between their teeth - looked to expose their rivals at the earliest opportunity.

Richard Capstick soaring leap at the back of the line-out allowed him to release Sam Simmonds to run at the Northampton midfield. Although the No.8 was chopped down deep inside the Saints 22, his fellow forwards were close at hand to take up the charge.

Just as they had done in the first half, the Chiefs huffed and puffed in attack, winning a series of penalties - the last of which saw Furbank sent to the sidelines for a ten-minute stint. Now with the numerical advantage, the home side looked to press home their cause.

Again, though, they could not capitalise and having soaked up all the Chiefs could throw at them, the visitors nudged themselves back down field to winning two penalties of their own.

England international Francis saw his first lengthy effort cannon back off the left post, but made no mistake with his second chance on 65 minutes, punishing Ewers for a high tackle on David Ribbans in the middle of the pitch.

Four minutes later and Francis was at it again, this time stroking over another lengthy effort to put his side six points ahead with less than ten minutes remaining.

The Chiefs, though, were not going quietly and having threatened with decent raids from Marcus Street and Sam Skinner, late turnover possession allowed them to summon one final push for victory.

The Simmonds brothers, as so often the case, led the charge with Joe collared with a high tackle in midfield. Play was allowed to continue and when it was worked out to the right flank, it was Hogg who fed the ball to Sam Skinner to dive over in the right-hand corner for the score.

With 79 seconds still on the clock, Joe Simmonds took his time setting up his conversion attempt. He sized it up numerous times, before engaging in his normal kicking routine. However, as he looked to strike, he had already been converged on by a pack by Saints, led by Sleightholme, who wellied the ball into the West Grandstand.

It was a bizarre, yet hugely disappointing conclusion to the game for the Chiefs, who must quickly regroup ahead of this Friday’s testing trip to Sale Sharks. 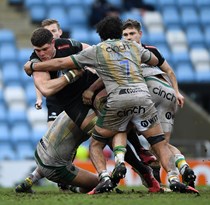 Flanker Dave Ewers looks to find a way through for the Chiefs. Picture: www.jmpuk.com