When push came to shove, it was Dave Ewers who came to the fore for Exeter Chiefs.

Not for the first time in his playing career, the Zimbabwean-born forward was instrumental in helping Rob Baxter’s side to victory.

Often a man of few words, the 30-year-old once again let his on-field actions do the talking.

Not only did he claim his side’s match-winning score, just five minutes from the end, but it was his action in the last minute - securing a crucial turnover penalty deep inside his own 22 - that saw the reigning Gallagher Premiership champions to a priceless victory.

By their own admission, the Chiefs were far from their very best. A catalogue of handling errors, occasional indiscipline, together with a sprightly display from Harlequins meant for long periods of this game they trailed on the scoreboard.

However, just as championship-winning sides so often do, the Chiefs found a way to prevail with a dominant last quarter that saw them to a ninth league win of the season. 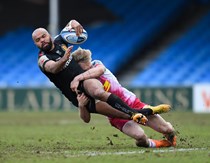 It was a killer blow for the visiting Londoners, but it mattered not come the final whistle as the Chiefs not only closed the gap on table-topping Bristol Bears, but at the same time edged themselves five clear of Billy Millard’s visitors.

Danny Care’s converted first half try, together with a penalty from Marcus Smith, helped give Harlequins a 10-7 lead at the turn, before they extended their lead in the second half with a try through Scott Baldwin and two more Smith penalties.

Having countered with a converted try through Stu Townsend in the first half, the Chiefs were made to dig deep in the final quarter, before eventually securing their win thanks to the brute force of Harry Williams and Ewers, who was making his 150th Premiership and Champions Cup start for the hosts.

Ahead of kick-off, Baxter made four changes to his starting line-up from that which had won at Bath seven days earlier. Into the pack came Jannes Kirsten, whilst behind Townsend, Tom Hendrickson and Alex Cuthbert were all included. Harlequins, meanwhile, were virtually at full-strength and led into battle by Smith, who was making his 100th Premiership appearance.

With rain in the air, an easterly breeze and underfoot conditions somewhat sticky, it was hardly a day for running rugby. That said, the Chiefs started brightly with Joe Simmonds and Cuthbert combining well to release Ian Whitten on the charge down the right flank. The Irishman made decent yardage before meeting opposition in front of him and flinging a wild pass inside.

Undeterred, the home side continued to press as first Joe Simmonds made a searing break through the middle of the Harlequins midfield, only to be cut down by a last-gasp tackle from Smith; then Tom O’Flaherty cut an equally impressive attacking line off a box-kick, only for Danny Care to pull off some last-gasp heroics in defence.

They were two gilt-edged chances for the Chiefs, who were then made to pay for their profligacy as Harlequins opened the scoring just two minutes later. Some slick hands in the centre of the field helped to release No.8 Alex Dombrandt, he brushed off two tacklers, before slipping a pass to Care, who was able to race unopposed to the posts for the opening try, converted by Smith.

It was somewhat against the run of play, but the lead proved short-lived as the Chiefs countered with their first try on 22 minutes. Having won a penalty, Joe Simmonds kicked to the left corner. Afforded the perfect platform, older brother Sam took the resultant line-out catch, he fed Kirsten who, despite being chopped down in sight of the line, was able to position the ball for Townsend to sneak over for his first of the season.

Referee Craig Maxwell-Keys was pretty confident of the Townsend grounding, but he was asked to check the actions of others in the build-up to the score. Thankfully, there were no indiscretions from the Chiefs and the try - converted by Joe Simmonds - was allowed to stand.

With little to choose between either side as the game headed towards the interval, it was Harlequins who reclaimed the lead, Smith plundering a routine penalty after the home side were pulled up for straying offside at a ruck.

Care looked to add to their lead with the last play of the game but, after a sustained spell of visiting pressure, his attempted drop-goal chance was short and wide of the mark.

Just as they had done in the first half, the Chiefs began the second half on the front foot. However, their attacking plans were often being undone by failing to hold onto possession - or some stout defensive duties from Harlequins.

Indeed, having soaked up the early home pressure, it was the visitors who extended their lead seven minutes into the half. Smith positioned them to within five metres of the Exeter line with a penalty, the fruits of which were mixed together to create the opening for Welsh hooker Baldwin to steal over in the right-hand corner.

Up against it, the Chiefs were in search of answers and desperate to find a foothold in the contest. Things, though, would not get any easier for them as Harlequins looked to inflict more woe.

A clever grubber kick in behind from Care looked to have put Ben Tapuai over for a third try under the posts. However, a knock-on in the build-up chalked that effort off, although the officials did come back for a penalty which Smith drilled over to extend his side’s lead to 13 points.

Sensing a first league victory at Sandy Park since 2014, Harlequins were seemingly in the box seat as the game headed into the final quarter. Baxter threw on fresh stock from the sidelines and the injection of pace and power had the desired effect as suddenly the Chiefs began to find some rhythm in their play.

Having won a penalty of their own, they kicked for the corner in a bid to glean maximum reward. Harlequins did well enough to hold the initial thrust at bay, but when the Chiefs regrouped and recycled back in field, they worked the opening for England international Williams to rumble over from close range for the converted score.

It was just what the doctor ordered for the Chiefs, who were now just a solitary score adrift in their pursuit of their rivals. The clock, though, was not in their favour and as the minutes ticked by, so the desperation in some of Exeter’s attacking play began to increase.

Chances came and went, before some direct running from replacement Richard Capstick and Sam Simmonds positioned them to within sniffing distance of the line. Primed to strike, the Exeter pack - as they so often do - took charge, eventually working the opening for Ewers to rumble over for the try.

Skipper Joe Simmonds still had to convert to put his team in front for the first time in the game, but he did that with no real concerns and just three minutes left on the clock.

Now behind, it was the turn of Harlequins to have to dig deep into their reserves. Smith’s restart was gobbled up by the Chiefs in routine fashion and although they worked their way across field, killing the clock in the process, they regained possession just over a minute out when a pass from Joe Simmonds was picked off on halfway.

Although the visitors pressed hard in attack, varying their approach with a succession of close-range raids, it was the immovable frame of Ewers who burrowed lowest into a ruck to win the crucial turnover penalty just metres from his own line.

It was yet another highlight for the no-nonsense flanker, whose worth to the Chiefs cause simply cannot be under-estimated, both in attack and defence. 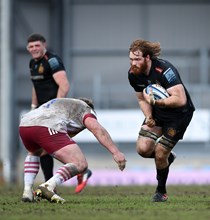