Exeter’s sticky start to the new Gallagher Premiership season continued as the Chiefs suffered late heartache in their home clash with Northampton Saints.

Rob Baxter’s side led for much of this Round Two encounter at Sandy Park, but were ultimately undone at the death by a late penalty from George Furbank.

All had looked good for the Chiefs in the early stages, racing out of the traps to build a 14-0 lead thanks to converted tries from Don Armand and Jack Maunder.

Northampton, though, were quick to counter, landing decisive blows of their own on the hometown favourites through Alex Mitchell and Matt Proctor before James Grayson nudged them in front with a first half penalty.

The Chiefs, however, were ruling the roost and when they snuck over just before the break through Rus Tuima, quickly followed by a second half penalty from Joe Simmonds, all looked good in the Westcountry as they targeted their first win of the new season.

The visitors had other ideas and in a creditable fightback during the final quarter, it was the Chiefs who paid the penalty, conceded quicks to Grayson and Furbank as Chris Boyd’s side followed up their success at the same venue last season with another notable scalp.

Undone in their seasonal opener at Leicester seven days earlier, Baxter saw enough in that display to still keep faith with a virtually unchanged starting line-out. Of those added, club captain Jack Yeandle returned to the front-row in place of Jack Innard, while Facundo Cordero came in for his first start of the season in place of Jack Nowell, who was nursing a slight hamstring twinge.

The Saints, meanwhile, were looking to build on their Round One victory over Gloucester and they started this encounter in Devon on the front foot as full-back George Furbank sliced through the heart of the home defence like a knife through butter.

Furbank, one of 45 players named in Eddie Jones’ England training squad this week, sped clear of the cover, only to be felled by some scramble defence from the hosts, who were playing in front of their biggest crowd at Sandy Park since March 2020.

It was an early warning shot from the Saints, but it was the Chiefs who propelled themselves back down field, hitting their rivals with a quick-fire try double in as many minutes.

Heavyweight carries from No.8 Rus Tuima and prop Harry Williams got them deep behind enemy lines, before Armand picked up from close range to crash over under the sticks to break the deadlock.

Fly-half Simmonds pocketed the extras to that score and Exeter’s second, which arrived just a minute later when Maunder was the beneficiary of a smart counter-attack that saw Henry Slade and Josh Hodge combine before the scrum-half dotted down unopposed.

Up by 14 points, it was the dream start for the Chiefs, but to their credit there was a response from the Saints, who wasted little time in reducing the deficit, Mitchell grabbing an opportunist score after a Grayson grubber in behind looked to have been covered by Tom O’Flaherty, only for the home winger to spill the ball just inches from his own line.

Grayson – the son of former Saints and England star, Paul Grayson - bagged the conversion to that score and Northampton’s second, which arrived midway through the half.

Again, the Chiefs will be disappointed with the score, especially as centre Proctor was able to shake off tackles from Simmonds and Will Witty before gliding over for the score. 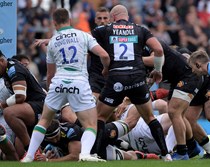 With parity restored, both sides continued to throw the kitchen sink at one another. The Chiefs saw two kickable penalties declined in favour of higher reward, but on both occasions the Saints combined en masse to hold them, whilst at the other end the Saints were eventually rewarded for a strong passage of play with a successful penalty from Grayson.

Behind for the first time in the contest, the Chiefs knew they needed to find a response before the break. Thankfully, they did just did that, making the most of Sam Matavesi’s yellow card for a no-arms tackle to send Tuima over for his first-ever Premiership score.

Simmonds dispatched a sublime touchline conversion to keep up his 100% record and give the Chiefs a slender lead at the turn.

With Saints still down a man on the resumption, it was the Chiefs who looked to set the attacking tone in the early exchanges. Using their forwards to do the donkey work, the hosts made decent enough inroads but, as would be the case for the majority of the contest, they could not capitalise to the full.

At the other end, a late hit on Grayson by Lonsdale offered the visitors a decent attacking platform from which to strike but, thankfully, the Chiefs’ were able to hold their rivals at bay as the chance went as quick as it came.

Growing back into their stride, a successful Simmonds penalty extended the home side’s lead to seven points, but the normally lethal marksman was unable to hit the target with his next effort just moments later, punting a long-range effort just wide of the mark after replacement Jack Innard had won a superb turnover penalty on halfway.

Threat averted at one end, Grayson’s decent day with the boot continued as he cut Exeter’s lead with a successful kick of his own on the hour mark.

That would prove his last action as he was pulled for the final quarter, but in his absence Furbank showed he was equally adept at landing pot shots of his own, the full-back cutting the home side’s lead to just a solitary point after referee Christophe Ridley pinged the Chiefs for failing to roll away from the tackle area.

It was gripping stuff for the neutrals, but for the majority inside Sandy Park the nerves were now beginning to really jangle as the game entered into its dying embers.

Not that it looked like the Chiefs wouldn’t prevail. Great work from prop Ben Moon at scrum time won the Chiefs a penalty that they were able to dispatch to the right-hand corner through the boot of Slade. It gifted them a golden opportunity to put the game to bed, but rather than hammer home their advantage close to the line, they coughed up a penalty of their own, gifting the Saints the chance to clear their lines.

This they did, not only trundling the ball back down field, but then using it to set up their own last throw of the dice. An initial penalty award allowed them to camp deep inside the home 22, before a second indiscretion gave the visitors the chance to win the game with just a minute remaining.

Needing no second invitation, up stepped Furbank to deliver the knockout blow, dissecting the posts at the North End to send the Saints marching back up the road with the points.

For Baxter and his team, more soul-searching will be required this week, especially as they face a fearsome trip into Sale waters, where the dangerous Sharks will be waiting to inflict potentially more misery on the men from Devon.