There was a time when Bath ruled the roost in this fixture.

Indeed, it took years for Exeter Chiefs to finally break their Premiership curse against the Blue, Black and Whites.

These days, times have changed. A changing of the guard has been evolving for some time now and in this latest match-up, it was Rob Baxter’s side who bossed proceedings from start to finish.

Six tries, five of which were converted, were the highlights of another polished performance from the defending champions.

No.8 Sam Simmonds bagged a brace - taking his seasonal tally to five in two games - whilst there were further touchdowns for Tom O’Flaherty, Sam Hidalgo-Clyne and Ian Whitten.

The others Simmonds, Joe, helped himself to three conversions, whilst there was another for Jack Walsh as the Chiefs romped past a Bath side, whose sole response came courtesy of a first half penalty from Rhys Priestland.

Having kicked off their title defence with an impressive win in the capital against Harlequins, Baxter stuck largely with the same cast they had produced the perfect performance at The Stoop.

Changes up front saw Ben Moon - the latest of the so-called originals - came into the front-row on rotation with Alec Hepburn, while behind Sam Skinner was back from international duty with Scotland to take his place in the engine room alongside Don Armand. 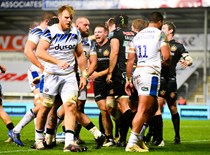 Otherwise it was as you were for the Chiefs, who were facing a Bath outfit that had suffered defeat to newly-promoted Newcastle Falcons in their seasonal opener.

They drafted England duo Tom Dunn and Charlie Ewels back into their pack, along with prop Beno Obano and flanker Josh Bayliss as they looked to combat the physical threat of the Chiefs, who had defeated them last month 35-6 in the last game played at Sandy Park.

That was the Premiership semi-final - and we all know what followed after that - in terms of Exeter’s triumph in the top-flight.

This season, they know they are marked men, but clearly nobody has told the Simmonds brothers, who have started the new campaign with a serious point to prove.

Surprisingly nowhere near the radar of England coach Eddie Jones, the national team’s loss is clearly Exeter’s gain as they took the lead inside nine minutes.

A clever snipe down the blindside from Jack Maunder saw him make decent yardage down the right flank, before he chipped in behind the Bath defence. Winger Joe Cokanasiga was always going to win the chase for the loose possession, but with the Chiefs scrum-half chasing at a rate of knots, he had no other option then to pick up and dot down over his own try-line.

It gifted the hosts a scrum, five metres out, and as a combined force they teamed together to bully the Bath pack back over the whitewash, gifting No.8 Sam his first converted try of the night.

The visitors looked to counter almost immediately, Priestland reducing the arrears with a simple penalty from in front of the home posts, before the Chiefs took charge once more.

Twice they threatened with two close-range raids, before a penalty to the corner offered them the perfect platform from which to strike. Skipper Jack Yeandle found Sam Skinner with the line-out - and with his team-mates converging around him, the Chiefs used the trademark ‘Sandy Gate turn’ to propel Sam Simmonds over for his second.

Three minutes later and the Chiefs were celebrating again with a third try. Looking to go wide through Joe Simmonds, the fly-half saw the Bath defenders charge up in unison, so he decided to go cross-field with a kick.

It was on the money for winger O’Flaherty, but rather than pluck the ball from the night sky, he volleyed first time the ball towards the Bath line. It sparked a foot race between him and two opponents, but it was the Chiefs man who took the honours, touching down to the aplomb of pretty much everyone inside Sandy Park.

Bath, who saw Joe Simmonds add a third conversion, could hardly believe their eyes, but they were perfectly picked off as the two sides headed for the sheds at the break.

Bath knew they needed to start the second period on the front foot - and they started brightly as they looked to drive a line-out move towards the Chiefs line. All appeared well initially, but as the home pack repelled the threat, it was Bath hooker Dunn who was adjudged to have taken the ball to floor, allowing turnover possession for the home side.

The visitors threatened again as Priestland tried to go cross field looking for Cokanasiga. His kick, though, was perfectly read by Facundo Cordero, who collected possession and sped down the right flank. He kicked ahead, just as Maunder had done in the first half, and once again England international Cokanasiga had to collect and carry over his own line.

Afforded another five-metre scrum, the Chiefs had the all-important bonus point in their sights. A series of shoves saw the home side look to press home their authority, but having won penalties off two of them, a third effort went against them as Ridley adjudged the Exeter front-row had come round.

Bath celebrated the decision like they had struck gold, but in truth it was a brief let-off as the Chiefs continued to dominate.

Visiting coach Stuart Hooper introduced a string of fresh faces to help reinvigorate his side’s fortunes, but it mattered little as the Chiefs - buoyed by their non-playing team-mates in the stands - smashed their Westcountry rivals into submission.

A turnover penalty on Zach Mercer, supplemented with some back chat from Ben Spencer, allowed the Chiefs to set-up camp deep inside the 22. The hosts looked to rumble it forward from the resultant penalty, but Bayliss illegally dragged the maul to the line, gifting the Chiefs another chance.

Set up to go again, this time there was to be no such problem, Exeter’s eight forming as one as they propelled towards the line. Again, Bath could not withstand the pressure, McNally dragging the maul to the deck.

The Bath lock not only saw yellow for his actions, but worse followed as Ridley went below the posts to award the penalty try, ensuring it would again be maximum reward for the Chiefs.

Winger Tom O'Flaherty dives over for his first half score. Picture: Getty Images

Bonus point in the bag, Baxter’s side weren’t finished there. Having thought they added a fifth try through Richard Capstick - only to be denied - there was no such problem when the Chiefs pushed again, 12 minutes from time, the Exeter pack shunting their counterparts back over the line, allowing Hidalgo-Clyne the simplest of finishes.

Young Aussie fly-half Walsh, making only his third top-flight appearance, banged over the conversion for his first-ever Premiership points - and then he came close to bagging a first try, slaloming his way through the heart of the Bath midfield before being brought to floor.

The Chiefs, though, recycled possession well and with three minutes remaining, they fashioned an overlap out wide, which Whitten was able to accept as he glided over in the right corner.

It was vintage stuff from Baxter’s boys, who must now ready themselves for next week’s trip to Leicester Tigers.