Exeter Chiefs full-back Stuart Hogg dives over for one of his two tries in his side's Gallagher Premiership victory against Wasps at Sandy Park. Picture: JMP Sport

Those who wanted to know how Exeter Chiefs would react to their European exit were duly reminded as Rob Baxter’s side emphatically dispatched of visiting Wasps at Sandy Park.

In a re-run of last season’s Gallagher Premiership final, the defending champions overcame a narrow half-time deficit to run in 33 unanswered points in a destructive second-half showing.

Just seven days on from surrendering their Heineken Champions Cup crown at the hands of Leinster, the Devonians demonstrated they won’t be giving up their domestic title without an almighty fight.

First half tries from Ollie Devoto and Jonny Hill gave the home side a perfect start, but they were cancelled out by a converted score for Josh Bassett and two penalties from young playmaker Jacob Umaga as the visitors led 13-10 at the break.

The second period, however, was all about the Chiefs who, not only flexed their muscles to deadly effect, but at the same time sounded a timely warning to those thinking of pocketing their silverware at Twickenham come the end of June.

Full-back Stuart Hogg scored twice, whilst Facundo Cordero, Joe Simmonds and Tomas Francis, the latter claiming his first-ever try for the club, put the seal on a polished performance from the ‘Men in Black’.

In their third home outing in as many weeks, Baxter’s side were looking to put the disappointment of the Leinster loss irmly behind them as they came up against familiar foes in Wasps.

The hosts made three changes up front, bringing in Alec Hepburn, Harry Williams and Sam Skinner, while behind Argentinian flyer Cordero was also added to the starting mix on the right wing.

The remainder of the home side was untouched and that cohesive unit needed to be at their best during a strong opening blitz form the visitors, who dominated the early exchanges with a tsunami of attacking raids.

The Chiefs, though, were holding firm under the pressure and when the visitors looked to strike off a five-metre line-out, it was Henry Slade who picked off a pass from Wasps scrum-half Dan Robson - on his 100th top-flight appearance - to release Devoto deep inside his own 22.

With virtually the length of the field to travel, the England international opened his legs, striding clear as a plethora of Wasps defenders did their best to collar him. With Cordero providing a more-than-useful allay on his right shoulder, Wasps full-back Rob Miller could not quite get across to deny the Chiefs man from scoring in the left-hand corner.

It was the classic sucker-punch from the hosts, who were unable to add the extras from skipper Joe Simmonds, who slid his conversion just wide of the far post.

From the restart, though, Wasps looked to counter immediately and they were rewarded when Hepburn was pulled up for coming in at the side as the Chiefs look to exit from their own 22. His indiscretion allowed Umaga to slot the routine penalty with relative ease.

After such a lively opening to the contest, you would have thought the pace would start to slow somewhat in the glorious Devon sunshine. Sadly, that message did not get through to the respective teams as they continued to go at one another hammer and tong.

As Wasps looked to launch another raid through Brad Shields, a brilliant rip in the tackle from Luke Cowan-Dickie, himself celebrating 100 appearances in the Premiership, saw him trundle his way through the middle of the park.

Umaga did his best to try and halt his throughway, but in an obvious size mis-match, the Wasps fly-half was bowled out, before the Chiefs forwards took up the charge. Cowan-Dickie linked with Sam Skinner, who in turn worked the ball to Williams, whose well-timed pass allowed Hill to canter over for his fifth score in as many games this season.

Two tries in the opening quarter, the Chiefs could not have asked for a better start, but Wasps were refusing to lie down - and in a stubborn resistance from the Midlanders, they reduced the deficit when Umaga slotted his second successful penalty after Hill was penalised for a seat-belt tackle on opposite number Will Rowlands.

As the two prized fighters continued to slug it out, it was the visitors who stole in front just eight minutes before the break with a try out of nothing.

A long kick into the Chiefs 22 was fielded easily enough by Cordero, who then passed to Hogg, but as the Scottish captain looked to drill his clearance down field, the expanded frame of Bassett was able to charge down his kick, gifting him the simplest of tries, which Umaga converted well from the left touchline.

Hogg was clearly frustrated by his error, but the half-time break allowed him and his team-mates to regroup and ready themselves for a big second half showing.

Now with the wind in their favour, the Chiefs again started brightly on the resumption. The hosts were quickly into their stride, but either stout defence from the visitors - or an over exuberance to try the miracle pass was hampering Baxter’s side in the early stages.

High from his perch at the back of the West Grandstand, Baxter relayed a simple, yet effective, instruction down to his army of staff on the sidelines. Entrusted with delivering the message, the fluorescent bibbed contingent ran to all corners, gently reminding the Chiefs of the rehearsed game plan.

Great inter-play between Sam Skinner and Sam Simmonds allowed the former to charge down field at a rate of knots, but it took a brilliant cover tackle to deny the Exeter No.8 of adding a 15th try of the season to his tally.

The warning, though, had been sounded and when the home side pressed again in attack, this time there would be no let-off for the visitors as Hogg atoned for his earlier error, finishing off a slick Exeter attack by racing in from the right wing and in under the sticks for Joe Simmonds to convert.

Back in front, it was a position the Chiefs would not surrender. Indeed, just two minutes later, they were grabbing their all-important bonus point score, Cordero getting in on the act as he plucked a speculative pass from Malakai Fekitoa out of the air and racing clear to dot down. 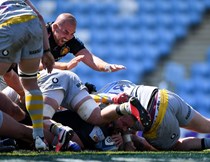 From being in a position to challenge, all of a sudden Wasps were not having to chase not only the game, but also the scoreline. Whereas first half they were pressing and probing, now the Chiefs were giving nothing in defence.

It meant Wasps were forced to throw caution to the wind - and with that came a catalogue of unforced errors, which the Chiefs duly lapped up to add further scores.

Replacement Stu Townsend was held just shy of the line, before the Chiefs used a quick tap penalty to work the opening for Francis to force his way over.

After seven years in Devon - and 120 first team appearances later -the Welsh international had finally found his way over the whitewash. His beaming smile as he rose from the floor was a picture in itself - but the job was far from done for the Chiefs

Joe Simmonds slotted the extras to that score and his own solo effort, which arrived just five minutes later, the fly-half squeezing his way through the heart of the Wasps defence to put the result to bed.

The Chiefs, however, weren’t done and with just over a minute remaining, they saved the best until last. Turning over possession deep inside their own half, the ball was fed back to Hogg in space, before he looked up and spotted the space in behind.

Spiralling the ball with laser-guided precision into the Wasps half, the Scotsman initially followed up his effort to play his colleagues onside, before then applying the after burners and scorching his way down field. Eventually catching up with the ball, he fly-hacked ahead, before winning the race to the line.

It was a sublime finish and underlined the class Hogg brings to the Chiefs, whose other highlight of the day was seeing fellow British Lion Jack Nowell return to the fray for the first time this season.

Both are expected to feature in next Friday’s top of the table tussle with Bristol Bears, a fixture which will not only go some way in terms of local bragging rights, but in the quest for who tops the pile come the end of the regular season.