Exeter Chiefs prop Daleaka Menin is mobbed by her team-mates after scoring her first-ever try for the club in their 54-0 victory over Sale Sharks at Sandy Park. Pictures: JMP Sport

Well, the head coach need not have worried as they duly delivered, inflicting a sizeable chunk out of their visitors hopes with an emphatic performance in the Devon sunshine.

First half tries from Liv Jones, Kanako Kobayashi, Kate Zackary, Deleaka Menin and McKinley Hunt set the tone - before further scores after the interval from Ebony Jefferies, Jennine Duncan and Hunt again sealed their first success of the season.

After a disappointing performance against Bristol Bears to open the season, Appleby shuffled her side, Jones making her first start in place of Lottie Holland, whileRachel Johnson started in the back-row with Linde van der Velden dropping to the bench.

Sale, meanwhile, came into this one also in search of their first win of the season after losing a nail-biter to Worcester Warriors on the opening day. They too made several alterations, Jess Kavanagh, Amy Orrow and Hannah Davis all making their first starts for the club.

For the first time since December, the Chiefs side were roared on by the Sandy Park crowd and they more than made the most of it. Indeed, the game was only 30 seconds old when Jones scythed through a gap in midfield, finishing off strong work from Exeter’s Japanese pair of Sachiko Kato and Kanako Kobayashi.

After losing Teleri Wyn Davis to injury, Sale began to ask questions of the Chiefs defence with a relentless spell of attacking play. The Chiefs, however, were up to the task and hit the Sharks with a perfect sucker punch. A flowing backs move saw Duncan race into the Sale 22, feeding Merryn Doidge on her inside. From there, Chiefs stuck to their tried and tested attacking structures, Kobayashi eventually showing serious power to dot down under pressure from several Sale defenders. Once again, Gabby Cantorna added the conversion to make it a dream start.

Barely two minutes later and the Chiefs were in again, the speed of Duncan and fellow winger Laura Sheehan causing chaos in the Sharks defence. The hosts continued to harry the Sale defence, with several massive carries from the pack, before co-captain Zackary spotted a gap in the Sharks defence to dot down.

It was prove one-way traffic for the Chiefs and not long after the 30-minute mark, the home side had their try bonus wrapped up in quite superb fashion. Receiving the ball in midfield, summer recruit Menin proceeded to shrug off several would-be tacklers before bursting clear from nearly 25m with a turn of speed many a back would be proud of. Cantorna again converted to extend the advantage.

With handling errors creeping in for both sides, the Chiefs were the ones to react quickest, Flo Robinson sending the electric Kobayashi through on the blindside. Although the centre was eventually hauled down five metres short of the line, the Chiefs regrouped well to go through the phases, Hunt dotting down from close-range for another converted score.

If there were any fears that the Chiefs may take their foot of the gas in the second half, they were extinguished within minutes of the action resuming. With Brooke Bradley, on for Robinson, and Cantorna pulling the strings at half-backs. With time and space, Sheehan picked up the ball and looked to be in, only for a superb covering tackle from Vicky Irwin to deny her the score.

Sale continued to fight, but they were firmly on the ropes. Zackary went close again, this time failing to collect a pass from Sheehan, before a superb break from Doidge was finished off under the posts, as she found Jefferies in support to cross under the posts.

Expansive rugby continued to be the theme for the Chiefs, with the rampaging Menin at the heart of everything. Another tremendous line-break from the prop saw her burst through the Sharks defence, offloading to Doidge who looked for all money to be in, only for Lisa Neumann to track back and pull off a quite brilliant try-saving tackle, to deny Doidge what would’ve been another classy score. 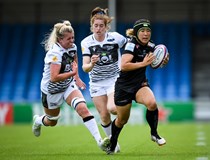 From the goal-line drop-out, the one player Sale wouldn’t have wanted to see gather the ball was Menin, as she powered through the Sharks defence, eventually being hauled down just short of the tryline.

With Chiefs peppering the Sale line, scrum-half Bradley spotted space on the blindside, the ball worked out to Jennine Duncan for her first try in an Exeter Chiefs shirt after an injury-disrupted debut season.

As Sale began to tire, the penalties began to rack up, Cantorna keeping her side with striking distance of the Sharks line. That pressure eventually told, with the forward dominance of Exeter again coming to the fore, Hunt dotting down for her second, bringing up the half century for her side. Cantorna’s seventh successful strike of the afternoon took her side out to a 54-point advantage, much to the delight of the Sandy Park crowd.

With the clock ticking down, there was one more attacking opportunity for the Chiefs, Kobayashi finding space in-behind with a deft chip, Sale eventually mopping the ball up and booting it into touch to see out the match.

Whilst maybe not quite the perfect performance from her side, Appleby will be delighted with the huge positives from this one. Now that her side have got their campaign up and running, attentions now turn to a blockbuster clash next weekend with reigning champions Harlequins at the Twickenham Stoop.