Exeter Chiefs Women's duo Flo Robinson and Merryn Doidge have both been named in the England Women's training squad ahead of the 2021 Autumn Internationals. Picture: JMP Sport

Exeter Chiefs Women’s duo Flo Robinson and Merryn Doidge have today been named in the 40-player England Women’s training squad ahead of the 2021 autumn internationals.

Head coach Simon Middleton has rewarded the duo for their impressive displays in this season’s Allianz Premier 15s, where the Chiefs currently sit fourth in the standings have clocked up victories over Sale Sharks, Wasps and defending champions Harlequins.

Both Robinson and Doidge were included in Middleton’s plans last season, but have yet to make their full Test debuts. Elsewhere, Sarah Bern is in line for her first international run out in a year after missing most of the 2020/21 season through injury.

The squad is made up of a mix of youth and experience, featuring 11 uncapped players.

The group assemble for the first of two preparation camps at Bisham Abbey next week (11-14 October) with the second camp taking place (18-21 October) before coming together to begin their Autumn International campaign on Tuesday 26 October.

All fixtures will be broadcast live on BBC Two.

Middleton said: “We have selected players on their form in the Allianz Premier 15s as well as the way players fared in our summer pre-season camps.

“Connie Powell is a player we’ve had an eye on for a long time and she’s been very unlucky with injuries in the past. We’ve got nothing but good things to say about her. She adds depth to our specialist hooking position. That’s key.

“Similarly, Maud Muir was absolutely outstanding in her contribution in camp last year for us and did the same last summer. She’s one of those players who has the potential to go to the World Cup, but we’ve got to create an opportunity for her and that’s what we’ll do.

“Sadia Kabeya and Emily Robinson are both back rowers. They have got a lot of the attributes we’re looking for. They’re aggressive, dynamic all-action players who look like they play with some edge about them.

“In terms of the backs, Ella Wyrwas looks terrific for Saracens. We had her on our radar when she was at Loughborough but she had an ACL injury and that took that opportunity away from her at that time.

“We’ve also got Exeter’s Flo Robinson and Merryn Doidge in the mix who have done really well for us in last season’s camps and in the summer. Both are very much learning their trade and we’re watching their development closely.

“Emma Sing’s been knocking on the door for a while. She’s a fast, physical player. Scott (Bemand) has watched her very closely and he’s been very impressed with her performances. Heather Cowell is an X factor player. She’s got unbelievable pace and great try-scoring instinct.

“We’ve got a host of potential debutants in the squad who are there because they impressed in the league or they’ve been on our radar for a while and have upped their game again this season. That’s what we wanted them to do. We wanted players to put their hand up in the league and that’s why they’ve been selected accordingly.

“The impact getting our games on terrestrial TV has is huge in terms of opening up to the wider audience and growing and promoting the game. You know if it’s going to be on BBC, it’ll be produced well and a great show. The emphasis they’ve put on the women’s games that they’ve covered previously, they’ve always done a fantastic job and it’s world-class delivery. It can only be good for us and we’re thrilled that our matches are on the BBC.” 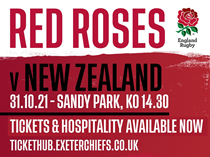