Exeter Chiefs forward Sam Simmonds in action for the British & Irish Lions during their clash with South Africa A at the Cape Town Stadium. Picture: Getty Images

Warren Gatland insisted his British and Irish Lions players left Cape Town Stadium with renewed conviction of their ability to win the Test series despite a 17-13 defeat by South Africa A.

A powerful shadow Springboks squad containing 11 World Cup winners and packed with 522 caps started ominously as they ran into a 17-3 half-time lead, but the Lions fought back through a Wyn Jones try and the boot of Owen Farrell.

While it appears South Africa have landed a psychological blow ahead of the series that starts on Saturday week, Gatland - who brought on Exeter Chiefs duo Luke Cowan-Dickie and Sam Simmonds during the second half - said his tourists are feeling “bullish” following a game billed as the unofficial fourth Test.

“We needed that tough hit out. I was pleased with how strong we looked in the second half,” Gatland said. “We’ll take a lot out of that and it will be good for us with 10 days building into that first Test. South Africa started very well and were physical at the breakdown, but we came to terms with that and I’m proud that the boys came back from 17-3 down.

“It shows that the Test matches are going to be a real arm wrestle and that’s as close to a Test match as you’re going to get.

“Considering they were pretty much at full-strength and we got a good feeling for how it was, the players are pretty bullish in the changing room. They’re pretty confident we can handle whatever they throw at us going forward.

“The players are pretty positive about that performance and knowing that we can still improve a lot. I think it’s going to be an incredibly exciting Test series and one we can go into with a lot of confidence.”

Gatland revealed that Wyn Jones suffered a stinger injury only and should recover quickly, but Liam Williams must follow the return-to-play protocols for concussion after failing an HIA.

South Africa director of rugby Rassie Erasmus, deputising for head coach Jacques Nienaber who is self-isolating, felt it was understandable that his players fatigued in the second half given their inability to train because of a Covid outbreak.

“We knew we were going to run out of steam. The guys played with a lot of heart. We can be proud of that,” Erasmus said.

Despite Gatland firmly rejecting Erasmus’ offer of another game against his A team on Saturday, the Springboks boss believes it is still possible.

Erasmus acted as water boy for his team, prompting Gatland to quip: “It was a little bit interesting! You won’t see me doing that. Different strokes for different folks, I suppose. A little bit strange, the director of South African rugby also being a water boy.” 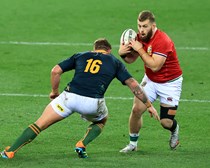 Exeter Chiefs hooker Luke Cowan-Dickie in action for the Lions against South Africa A in Cape Town. Picture: Getty Images