Chiefs side to face Bath

Rob Baxter has challenged his Exeter Chiefs side to hit full throttle mode as they brace themselves for a huge six-game block of Gallagher Premiership and Heineken Champions Cup action.

It begins tomorrow as they head up the M5 for a testing Westcountry derby against rivals Bath in Round Nine of the Gallagher Premiership (7:45pm).

Returning to top-flight action for the first time in a fortnight, the Chiefs are acutely aware that although they are positioned fourth in the standings, a failure to make the most of these upcoming weeks could well have an impact on their seasonal aspirations.

“The boys are aware, they’re not daft, they know we’re kind of clinging onto fourth spot at the moment,” said Baxter. “We’re desperate to keep accruing those Premiership points that will keep us on track.

“For us, this is a really important time of the year and it feels like we now have to put our foot down if we want to be involved in those big games at the end of the season. We’re okay where we are, but equally we know we need to push on. We’ve had some frustratingly tight losses, plus a poor loss against London Irish.

“Equally, we’ve had some good away wins at places like Sale, Wasps and Gloucester, but it’s finding that consistency. Looking to Friday, this is probably the last fixture I would have liked to have. With Bath not having won a game, they can throw everything at us. By that I mean, it’s not a free hit - because Premiership games aren’t like that - but they are a team who have had a couple of weeks off and now they can come into this game knowing they are 80 minutes away from achieving their biggest celebration of the season.

“What we have to do as a club is not only match that fight, but put our own mark on the game and really looking to impose ourselves on Bath.”

For years the Rec was an unhappy hunting ground for the Devonians, but in recent times it has been the Chiefs who have held the upper hand in league meetings, winning four of their last five meetings against Stuart Hooper’s side in the Roman city.

“If people remember, Bath were the last team in the Premiership for us to beat,” said Baxter. “Since then, we’ve gone pretty well against them. That said, if you saw their last performance against Leicester, they will have been disappointed not to have got more from that game.

“Like with any Premiership game, we know it we don’t turn up on Friday night then we’re going to have issues and that’s the message I’ve been telling the guys all this week. We’ve got to be willing to fight for anything and everything throughout.

Ahead of kick-off, Baxter has been boosted with the return of a glut of star names from international duty and injury. Up front, Sam Skinner, Dave Ewers and Sam Simmonds all return, while behind the backs are buoyed by the return of Tom O’Flaherty, Henry Slade and Stuart Hogg, the latter of whom became Scotland’s all-time top try-scorer in their victory over Japan at Murrayfield.

Also included from the outset tomorrow is Irishman Ian Whitten, who has been rewarded by Baxter for two notable displays in the recent Premiership Rugby Cup games against Bristol Bears and Gloucester.

“I thought Whitts really stood out this past two weeks,” said Baxter. “He’s a guy who has been out of the first team, but he went out in those games and wanted to fight and challenge for everything that was going on. As a coach, I like that, and it’s those characteristics that you build a side and a club around. As a senior guy, he showed all those youngsters exactly what we expect from an Exeter Chiefs player.”

Baxter also reserved praise for others involved in recent weeks, including Welsh youngsters Oli Burrows, Dafydd Jenkins and Dan John, as well as scrum-half Sam Maunder, who is rewarded with a place on the bench alongside the returning Jack Innard. 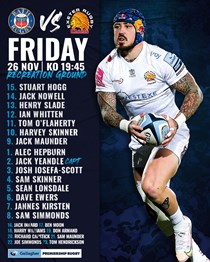