Chiefs side to face Glasgow Warriors

Rob Baxter knows the pressure is on his Exeter Chiefs side as they look to advance in this season’s Heineken Champions Cup, but he’s confident they will deliver, starting against visiting Glasgow Warriors tomorrow (5:30pm).

Set to resume their European escapades at Sandy Park, the Chiefs will be looking to not only secure vital qualification points, but at the same time banish the disappointment of their pre-Christmas loss to the Scotsmen in Round 2.

Having headed North of the Border brimming with confidence following victories over Bath, Saracens and Montpellier, the Devonians produced a spluttering showing at Scotstoun, before eventually going down 22-7.

“It was a mixed performance,” said Baxter this week. “It was a weird one in a way, just because we had a good focus on what we wanted to achieve and physically we were in the fight, particularly in the first half, without being technically good enough.

“We dropped a lot of ball, we didn’t get through our phases, we were passive and out set-piece wasn’t great on the day. In the second half, other than one decent period where we did get things right and we did score, we weren’t all that great and subsequently got nothing from the game.

“Yes, you have to give Glasgow some credit for the way they played and the things they did in the game, but watching it back it was clear to see where we had some of our issues.

“That said, we have played away to Glasgow before and not come away with much and that’s not been the be all and end all of our European season. We have learnt from those games and quickly moved on – and that’s what we need to do again this weekend.

“I’d like to think the Glasgow performance was a bit of a blip for us, just because for the last five or six weeks it’s felt like we have been on a real upward curve. I include last week’s game at Harlequins in that, even though with loss, as there were a lot of positives to take out of the game.

“Some of our physical stats from that game were fantastic – and when I say fantastic, that is players putting in physical efforts that compare with any game, over any time in the last few years when we have been very successful. We did that even playing with one man down in the second half, so it shows there is fight in us, all we have to do is align it in the right way and keep producing it each week.”

Baxter insists the challenge for his squad is to replicate that fight and desire they showed at The Stoop more consistently, that way they can springboard themselves onwards and upwards in their quest for both English and European success.

“That’s what we have talked about this week, just finding that consistency,” added Baxter. “The other things has been that the focus for the season is narrowing all the time, which I think will ultimately aid us. When you look at this weekend it’s vital we get points from the game, not just because we need them, but because we don’t know what will happen next week in terms of us going to France.

“It’s the same in the Premiership, if we want to be contesting for that top four come the end of the season, we need to start getting points on the board that will make sure we are firmly in the mix. That process will start in a couple of weeks up at London Irish.

“For now, we have to focus our attentions on Glasgow and making sure we get as much as we can from this weekend’s game.”

As the Chiefs found out, though, the visiting Warriors will be no pushovers and Baxter is expecting another acid test for his troops in battle.

“They are a good side, full of internationals and players who have played at the highest level,” added the Chiefs’ Director of Rugby. “As I said, they played well against us in the previous fixture and they won a lot of the physical battles which, if you do that in most games, you normally tend to come out on top.

“What we have to do this weekend is flip that scenario on its head, whilst at the same create a performance that gets the crowd behind us and creates a level of intensity and passion which they had at their place.”

Team news for the Chiefs sees Baxter make a series of changes to the starting line-up from that which faced Harlequins last time out. In the pack, Alec Hepburn’s three-game suspension means Ben Moon comes into the front-row, where he will be joined by the returning Luke Cowan-Dickie, who will also skipper the side.

Sam Skinner and Sean Lonsdale take over from Scottish international Jonny Gray and England and British Lions Star Jonny Hill in the second-row, while behind the scrum the solitary change sees Tom O’Flaherty return on the wing in place of Facundo Cordero. Young Welsh Under 20's star Dafydd Jenkins will make his European debut if he features from the bench. 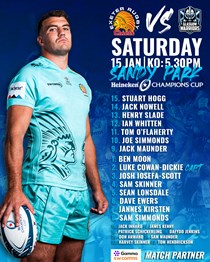