Chiefs side to face Gloucester

Rob Baxter has challenged his Exeter Chiefs side to ‘pour everything’ into tomorrow’s Gallagher Premiership encounter with Gloucester at Kingsholm (7:45pm).

Refreshed and revived after their mid-season break, the Devonians will kick-off a crucial month ahead in the top flight determined not only to enhance their position at the summit of the division, but at the same time lay the foundations for what Baxter hopes will be a long and successful second half to the season.

And as he rightly pointed out in his weekly media briefing, his side have everything ‘in their own hands’ moving forward.

“Both in the Premiership and in Europe, we have things in our own hands,” said the Chiefs’ Director of Rugby. “We’ve got a home quarter-final in Europe and if we out-perform Northampton on the day, that situation doesn’t change. And we have to look at it very much in the same terms when it comes to the Premiership. 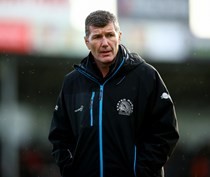 “It’s in our hands to put together a series of quality games and quality performances that mean we collect the points that enable us to stay there. Right here and now, we don’t need another team to win or for someone to beat someone else. We can control our destiny by winning games of rugby.

“For me, that’s a fantastic situation to be in. However, it’s only fantastic if you are prepared to roll your sleeves up and make the most of it. We have done that in the past and it’s what we have to be prepared to do now.

“There is no magic ingredient to this. I have said to the lads I can’t sit here and give you some magic way to win the next four games, because there isn’t an easy way. You have to commit to them fully. If you do the hard work, the rest kind of falls into place.

“It’s when you think you don’t have to work hard and want to take shortcuts, that’s where you tend to come unstuck and find yourself in a dogfight and trying to chase the scoreboard. Sometimes locking down and getting guys to look at each other and commit to each other about what they want to put into a game is what will control everything.”

Certainly, Baxter has been drilling that message into his team this week, particularly given their disappointing first half display in their last league outing at home to Sale Sharks.

In what was a turgid first 40 minutes at Sandy Park, the Chiefs found themselves 22-5 down against Steve Diamond’s side. Although they improved massively during the second period, reducing the final deficit to 22-19, the self-inflicted damage they had caused to themselves earlier in the contest eventually came back the home side.

It was a performance that Baxter was not afraid to shy away from in the aftermath of that game – and he continued his assessment briefly this week, adding: “I kind of think we let ourselves and our supporters down with that first half performance. It wasn’t good but, at the same time, I can’t give the guys enough credit for their second half display.

“Had we produced two halves like that, then we would have won the game. That said, Sale are a good side and if you don’t go out and pour everything into a game, you’re going to lose. It will be the same again on Friday and it will the same moving forward. We have got to expect to give everything against Gloucester if we want to win the game.”

Standing in the way of Baxter and his Chiefs will be a Gloucester team, who themselves will be looking for a return to winning ways having lost 34-16 to local rivals Bristol Bears.

Over the years, tussles between the Chiefs and the Cherry & Whites have proved fiercely competitive with the last six league meetings just favouring Baxter’s side 3-2 in victories with one draw.

“We are expecting a full-on game,” warned Baxter. “The good thing about being in and around the top of the Premiership is you know what to expect – and that’s a full-on challenge every time you play. Because you are top, people want to knock you off.

“Like ourselves, Gloucester have ambitions of being in the top four and wanting to win the Premiership. For them, we are one of the teams they are competing against, so there is every reason to say this is going to be a very tough game. That said, we’ve played in a lot of tough games, collected points from those games, and that’s the challenge we have got to want to face again.

“As I said, you lose games of rugby – and that’s fine, I have no issue with that. What disappointed me against Sale was that I don’t think we showed any of the top qualities we have as a team, particularly in the first half where we let them get some real momentum and we conceded what were a couple of very soft tries. Ultimately, that left us with too much to do in the second half, when we actually did roll our sleeves up and got on with things.”

Ahead of this latest kick-off, Baxter will be buoyed by the return of several key first-team names. Scottish captain Stuart Hogg is back at full-back, as is Aussie scrum-half Nic White. Up front, England international Harry Williams was not needed by Eddie Jones for his latest training camp, so he starts at tight-head.

CHIEFS SIDE TO FACE GLOUCESTER