Chiefs side to face Gloucester

Ricky Pellow believes a few tweaks to the system can have the desired effect as his Exeter Chiefs look to press on in this season’s Premiership Rugby Cup.

Undone 33-27 at home to Bristol Bears, the two-times champions head to Gloucester tomorrow (1pm) looking to catapult themselves back into contention in Pool One at the halfway stage.

In what was a spirited showing from a youthful Chiefs outfit last weekend, skills coach Pellow sticks with a largely unchanged mix for his side’s trek to Kingsholm.

However, he wants his group to learn lessons from their setback and put them into practice against the Cherry & Whites, who opened their account with a thumping 71-10 win over Bath.

“Obviously, the result didn’t go our way last week, but for long periods we were very much in the game,” said Pellow. “We fought hard to build a lead on two occasions – and to be in and around in at the 60-minute mark – but in the end we couldn’t quite hold Bristol in that last quarter.

“This week, we’ve tweaked a couple of things in terms of how we control the game and, if we add that to what was a solid base, then I think we’re in a strong position going into this weekend’s game.”

As Pellow eluded too, the Chiefs – who included four debutants in their starting line-up a week ago – more than held their own against the more experienced Bears and the Cornishman wants to see ‘more of the same’ from his players tomorrow.

“Gloucester away from home is always a tough test for any side,” he warned. “That said, I think it’s a great test for this group of players. Like Bristol, they will have a strong set-piece, which they’ll look to play off, and across their squad they have talented players, particularly in their back three.

“We’re aware of that, but if we can stand up to them physically, address those areas where we weren’t quite up to speed, and then go after them ourselves, creating those attacking opportunities with multi-phase rugby, then the space will open up for us.

“As I said, last week there were a lot of positives for us to take from the game. There was a lot of fight, a lot of energy and a will to work hard for each other. If you have those qualities in your side, then it’s easy for a crowd to get behind you – which they did – and it gives you that base from which to build.

“We’ve talked about that again this week, producing more of those same qualities, but just correcting a few things and really going after the game again.”

With a large nucleus of last week’s side pulling on a Chiefs jersey for the first time in a long time, Pellow has also highlighted the benefit of players featuring for loan clubs in the National Leagues.

“I think it’s a big credit to the loan clubs,” he added. “A lot of the team hadn’t pulled on a Chiefs jersey for a long time, but they have been playing at clubs like Cornish Pirates, Taunton and Plymouth Albion. Having those guys out playing regularly at these clubs, it’s getting them crucial game minutes and it’s helping with their overall development.

“You could see last week that a lot of them brought what they had been doing with their loan clubs and transferring it into a Chiefs jersey. Now, we want them to do exactly the same this weekend and use the experience of these two weeks to really drive themselves forward.”

Team news for the visitors sees the Chiefs stick with virtually an unchanged starting line-up. The back division, which will be spearheaded by skipper Sam Maunder and fellow half-back Jack Walsh, remains untouched, whilst up front the sole change sees Richard Capstick come in on the flank for Lewis Pearson, who moves into the second row in place of Aussie Ryan McCauley.

On the bench, Max Norey and Matt Johnson offer back-up to the front-row, whilst Scottish international Sam Hidalgo-Clyne is also waiting in the wing as back-up cover to Maunder at scrum-half. 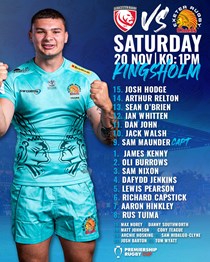