Chiefs side to face Worcester

Up and running at the third time of asking, Exeter Chiefs Director of Rugby, Rob Baxter, is hoping his team use the foundations of their win at Sale Sharks last weekend to build another victory against Worcester Warriors tomorrow (3pm).

In what was a much-improved display from the Devonians in the North West, the challenge for the Chiefs is now to back that up against the Warriors at Sandy Park.

Buoyed by the return of all four of their British & Irish Lions for the fixture, Baxter is hopeful the summer tourists can roar into action, adding further bite to what is a powerful array of talent on show.

“It is a relief that we’re up and running,” he said. “There is the obvious relief of collecting points, but there is also the relief of seeing us playing like I know we can.

“What I saw up at Sale last weekend was more like what you’d describe as an Exeter Chiefs performance. What I saw from us was that ability to just ‘get on with things’. Even when we went ten points down, what did we do?

“We just got on with things, rolled our sleeves up, kept the ball for long periods and really went through that process of trying to batter down what was a pretty determined and energetic defence from Sale. People will say it didn’t look that pretty, especially when we’d get knocked back a few times, but to me it was very pretty and I could see the effect it was having.

“What people need to remember is that you don’t tire an opponent down by kicking the ball in behind them or floating long passes here and there. Sometimes you just have to get your head down and work hard, which is exactly what we did. That’s how we were able to create those moments later in the game where Sale did begin to tire, allowing us to create those tries for Sladey.

“Talking to Sale afterwards, they were pretty pleased with their defence, even though we scored three tries – and probably should have scored more – but we looked like a team that got our balance right last week. As I always say, you have to be able to challenge teams in different ways. We weren’t the top try-scorers last season from playing just one way, we work hard in all facets of the game to create those different opportunities.”

More of the same will be needed from the Chiefs tomorrow against a Warriors outfit, who looked transformed somewhat under the guidance of their new head coach Jonathan Thomas.

A plethora of new faces have been added to the playing ranks at Sixways this summer and Baxter acknowledged the threat the Midlanders pose to his side’s hopes on home soil.

“They’ve certainly added some quality,” he added. “Although I’m not in their camp, but you do wonder because there is no relegation this season if this has allowed certain teams, including Worcester, to enjoy their rugby a bit more.

“When you get at a club that has kind of got used to being in a battle, you can start out being in a battle without even needing to. It can affect you a bit. You can make the odd decision or the odd call that isn’t right in the game, but feels right because of where you are in the league and what your aims and ambitions are.

“Once your remove that, they look like a dangerous side, who are collecting points, feeling comfortable amongst themselves and who are challenging every team they play. Add all those things together and it means it will be a challenge, both physically and mentally, that we have to overcome this weekend.”

As expected, Baxter sticks with a largely unchanged starting line-up for tomorrow’s encounter. The sole change in the back division sees Tom Hendrickson replace Ollie Devoto (ribs) in the centre, while up front the Lions contingent of Luke Cowan-Dickie, Jonny Hill and Sam Simmonds all come in for their first starts of the season, replacing Jack Yeandle, Sean Lonsdale and Don Armand.

Props Alec Hepburn and Harry Williams are also restored to the starting line-up having come off the bench at the AJ Bell Stadium last Saturday.

The boost of having his four Lions back in harness is huge for Baxter, who has praised the input they have provided in recent weeks.

“Obviously it’s great to have them back and available for selection again,” added Baxter. “That said, they have been contributing a fair bit these last few weeks in training. They’ve certainly helped up the intensity of our shadow 23 in training, but they’ve also challenged things in meetings as well.

“You can see with all of them a growing maturity of being away in that environment and knowing what is expected at the very top end of the game. They’ve not been afraid to question things and say things haven’t been great these last few weeks. That can be hard to do, especially when you are not playing themselves, but it’s them that are helping to drive the standards amongst the whole group upwards.”

Tomorrow’s fixture will be dedicated to the NHS for all the work they have done – and continue to do – in the midst of the Covid-19 pandemic. The Chiefs will wear a specially-designed playing kit in their honour, as well as having a minute’s applause prior to kick-off.

An auction of the playing kit, sales of t-shirts and pin badges will also occur with proceeds going to the NHS Charity.

A big thank you to our Match Sponsor this week RGB Building Supplies! 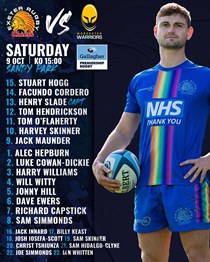