It was final day heartbreak for Susie Appleby’s Exeter Chiefs side, as it was Gloucester-Hartpury who left Sandy Park singing in the rain after securing an 18-12 victory in their final Allianz Premier 15s fixture of the season.

In horrible rain and with a swirling wind, the Chiefs started strongly, dominating possession and territory to take a half-time advantage, courtesy of McKinley Hunt’s try converted by Gabby Cantorna.

With the elements in their favour after the break, it was the visitors who hit back strongly with scores from Zoe Aldcroft and Ellie Underwood, along with eight points from the boot of Emma Sing to snatch victory, following a second score for the Chiefs from Merryn Doidge.

Ahead of kick-off, Appleby made just one change of personnel to her starting XV from the Sale match, with Abbie Fleming returning to the starting XV for the first time since Loughborough Lightning before Christmas and Kate Zackary moving to outside centre following an injury to Niamh Terry.

Gloucester-Hartpury made six changes themselves off the back of their loss to Wasps, most notably at No.8, where Six Nations Player of the Championship nominee Aldcroft returned to steer the pack.

The women’s team this season have been fortunate to only have had to deal with the swirling Sandy Park wind once, but it came back to bite them here, creating chaos at line-out time for both hookers.

With the ball more slippery than a proverbial bar of soap, it was always going to be a challenge for both sides, with the conditions dictating a physical forwards match.

In the first half defence dominated, with both teams losing out on prime attacking opportunities as handling let them down. However, one thing the Chiefs have been magnificent at in their debut season is their work with pick and drives around the breakdown – and it served them well one final time, Hunt crashing over for her eighth try of the season, Cantorna converting.

In truth, the conditions limited any genuine attacking opportunity for both sides, with the first half descending into something of a free-kick fest after repeated knock-ons from both sides, purely down to the conditions.

The Chiefs may well have had the lions share of possession and territory, but they couldn’t quite make their way over the try-line for a decisive second try in the first half.

With the conditions as challenging as they were, both hookers struggled to get clean ball at line-out time, Ebony Jefferies for Exeter, a supreme presence in the air to disrupt Gloucester-Hartpury’s ball.

The second half saw a near reversal of the first 35 minutes, the visitors instead taking the opportunity to dominate territory and possession in the same way as Appleby’s side had done in the first half.

It soon paid dividends as they continued to ask questions of the Chiefs defence, Aldcroft eventually scoring after a fine break from Sing had caught the home defence cold. Sing’s conversion levelled proceedings, leaving the match finely poised as it headed towards its conclusion.

The Chiefs continued to ask questions of the Gloucester-Hartpury defence but were caught cold, as the visitors stunned Sandy Park with a fantastically worked second score. Following a scything break, Underwood was able to race away and dot down to take the lead and swing things in favour of her side.

Appleby’s side needed a response and fast and they found it through Doidge. With little under 10 minutes to go, the full-back latched on to a perfectly weighted kick in behind from Patricia Garcia to dot down in the corner and level proceedings.

There was, however, to be a cruel twist of fate though for the Chiefs, as Gloucester-Hartpury immediately regathered the ball from kick-off and won a penalty directly in front of the posts, Sing slotting the kick to regain the lead for her side.

With time fast running out, the Chiefs continued to press and harry the Gloucester-Hartpury defence but their efforts were rebuked every time. Ill-discipline again cost the home side, allowing Sing to slot a second penalty and take her side’s advantage out to six points.

Although the Chiefs huffed and puffed in the dying embers, it wasn’t to be and it was the visitors who headed back up the road with the victory, which ensured they leapfrogged their rivals to finish fifth in the final shake-up. 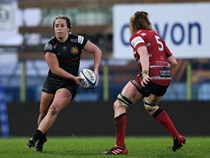 Gabby Cantorna weighs up her options at Sandy Park