The sun was shining at Sandy Park and it continued to shine on Exeter Chiefs Women as well, as they secured a 34-14 victory over Worcester Warriors to maintain their 100% record in the Allianz Cup.

After a slow start, the Chiefs hit top gear and never looked back, as tries from Abby Middlebrooke, Patricia Garcia, Garnet Mackinder, Flo Robinson and Clara Nielson, along with nine points from Patricia Garcia’s saw them home.

Worcester responded with tries from Meg Varley and Charlotte Wright-Haley, Ellen Murphy converting both, but by then it was too little too late.

After last weekend’s victory over Sale Sharks, Susie Appleby made just one change to her starting XV, as Mackinder made her first start of the season. She came in on the wing Wirth Merryn Doidge switching to full-back with Chloe Rollie away on international duty.

The Warriors, meanwhile, came into the clash in fine form as well, after defeating Saracens 17-0 in their opening cup encounter. They made several changes from that win with Abi Kershaw and Evie England coming in on the wing and Flo Long returning to action.

After a slow start from both sides, it was the Chiefs who opened the scoring after 11 minutes, Middlebrooke crossing for her first try in a Chiefs shirt after a close-range drive from the pack, Garcia adding the conversion. It was an impressive performance from the young prop as she backed up last Saturday’s first start with another strong display.

Five minutes later, Garcia, moving back across to scrum-half, slotted a penalty to further extend her team’s advantage as Exeter continued to apply the pressure.

For all Worcester’s endeavour, they struggled to gain any territory or momentum throughout the match, as their ill-discipline let them down and allowed the Chiefs to capitalise. After several warnings from referee Max Weston, his patience finally wore thin after the 20-minute mark as England saw yellow for an infringement at the ruck on her own line.

The Chiefs thought they were in moments later through Olivia Jones after a beautifully crafted backs move only for the officials to adjudge that Nancy McGillivray’s pass had drifted forwards.

That second score would soon follow through Garcia. The score though was all about the work of Ebony Jefferies, who cut a superb line off Flo Robinson to break through the Warriors defence, showing her game awareness, to feed Garcia who was tracking on her inside to dive over, before converting her own try.

Chiefs were in rampant mood now as Mackinder scored her first of the season soon after. Again, it was work from forwards that made the try, lock Charlie Willett showing some silky hands to offload out of the tackle to Nielson, who then feed Mackinder to race clear from halfway.

A fourth try would follow in the final moments of the first period as Jefferies broke free into the Worcester 22, Garcia recycling quickly to then feed Robinson to race in under the posts, leaving a shellshocked Warriors under the posts again as Garcia added another two from the tee.

In the second half, Worcester looked to add to their firepower with the returning Jade Shekells coming on for her first appearance of the season after being out injured. The Chiefs, though, were straight back on the front foot yet more ill-discipline from the visitors continued to let them down. 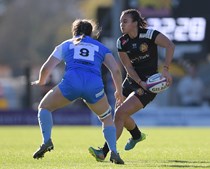 And it didn’t take long for the Chiefs to add to their tally, hooker Nielson dotting down from a rolling maul that was as destructive as it was well set.

Worcester though, had threatened in the first half and finally, were able to register their first points of the match soon after. Shekells has made a name for herself as a destructive ball carrier for Worcester and she showed that again here, blasting through the Chiefs defence to within metres of the Exeter line. Whereas in the first half, Worcester were unable to capitalise on their opportunities, they made no mistake here, as the ball was worked wide to Varley to skate in. Murphy converted as the Warriors looked to hunt a way back into the match 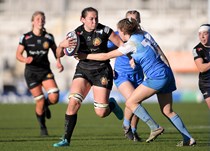 In truth, Appleby and her side will be disappointed with their second half showing, as they were unable to capitalise on the chances they created. Multiple times they looked to build phases and possession in the Worcester half, only for handling errors or penalties in the face of ferocious defence, left tthem frustrated.

Whilst in the first half, Worcester will have been disappointed with their lack of discipline, they were superb in the second-half, Murphy continuing to pull the strings with a series of inventive kicking options to allow her side to work their way up the field.

The arrival onto the field of flyers Vivky Foxwell and Vicky Laflin also seemed to reenergise their backline, as they found space in the wide channels. Exeter’s defence though stood firm, with the back-row trio of Jefferies, Eilidh Sinclair and Maisy Allen defending resolutely and ferociously when it matted most to thwart wave after wave of Worcester attack.

The Warriors, however, would have the final say as a superb offload off the floor from Jo Brown sent Wright-Haley scampering away under the posts for her side’s second of the afternoon, Murphy again adding the extras.

Although disappointed to concede, the Chiefs had done their job, securing a victory that leaves them sitting at the top of the tree in Pool B of the Allianz Cup. Next up, the side will return to Premier 15s action against Loughborough Lightning at Sandy Park on November 27.