There is no let-up in the size of the challenge facing Susie Appleby’s Exeter Chiefs Women's side at the moment.

Last weekend against Wasps, Appleby’s side produced a clinical second half performance in atrocious conditions, to secure a 23-13 victory that elevated the side into the Allianz Premier 15s top four for the first time.

The challenge now is to stay there and continue looking up the table - with Appleby explaining that her side have the “motivation to improve every single week.”

“The good thing about the last few weeks is that it’s hopefully bought some heightened confidence into the squad," said the head coach. "The girls have performed well in different conditions and on different pitches. Last week, we didn’t play very well in the conditions in the first half, but we changed and played much better in the second half. There are learnings from that, but Sarries is a different challenge.”

Appleby, though, readily admits that “it doesn’t get much bigger than going to the Stone-X Stadium and playing Saracens.”

Sunday’s hosts have put last season’s disappointment of losing in the final firmly behind them this season, currently sitting pretty in second place in the standings.

Appleby expects the hosts to offer a new challenge for her side to the one’s Exeter have faced so far this season, with the kicking options Alex Austerberry’s side possess adding a new dynamic to the game.

“They will drop deep and put their 10 and 15 into the backfield, who are both kickers of the ball. It might appear that there is space there, but we could have lots more ball in hand potentially this week,” she admitted. “Until we get there and see who is front of us, we just prepare as normal.”

This weekend's match will see a first start for hooker Clara Nielson, having arrived in the summer from Bristol Bears, with Appleby taking the time to praise her impact since joining the club.

“It’s fantastic. Clara has been training really well and performing really well when she’s come onto the field Emily Tuttosi has been outstanding as well, but she’s picked up a knock, so Clara gets her opportunity, which is much deserved.”

Tuttosi’s injury sees Daisy French named in the match-day squad for the first time this season, having made five appearances for the club in their debut campaign.

On the bench, there is also a return to action for Japanese star Sachiko Kato, who has shaken off the knock that ruled her out against Wasps. The only other change for the Chiefs sees recent arrival Zintle Mphupa take her place amongst the substitutes, having arrived from Western Province last week.

Speaking about her selection, Appleby expressed her hope that Mphupa can impress when called upon, as she gets set to become the first South African player to take to the field in a Premier 15s match.

“Zintle is involved fresh from South Africa. She’s been learning the way we play, so fingers crossed she gets some time off the bench.”

Appleby also took the time to praise the early season work of her entire squad, which has resulted in a number of international call-ups ahead of the Autumn tests.

With the news that young backs Flo Robinson and Merryn Doidge have been named in Simon Middleton’s England squad, Appleby was visibly delighted to see their efforts for the Chiefs translate into international call-ups.

“There’s great stuff going on all over the place. Flo and Merryn have had their taste of internationals and did really well in the camps in the summer,” she said. “We’ve had great feedback about what they’ve been putting on the field so far and they very much merit their inclusion in the squad.”

As well as Doidge and Robinson, Welsh trio Abbie Fleming, Caitlin Lewis and Niamh Terry will also look to impressive against some of the world’s best in the Autumn, having been named in Geraint Lewis and Ioan Cunningham’s squad.

In a busy month, Exeter’s North American contingent will face off against each other at the start of November, before travelling across to Europe for their Autumn fixtures, whilst Japan and South Africa will also be taking on some of Europe’s best.

With such a large number of her squad looking to be involved in those matches, Appleby sees the huge number of international call-ups as testament to the efforts of her squad.

“With lots of different nationalities all going off to autumn internationals there’s all sorts of really positive stuff going on and it’s reflected in the selections that have been announced for international sides.”

She did, however, insist that whilst their was still club action to attend to, her players were firmly focused on putting in a performance in that Chiefs jersey against Saracens.

“These girls are great. They want to focus on what they’re doing in a Chiefs shirt first and foremost and we’re hoping to put a performance together against a really impressive side on Sunday.” 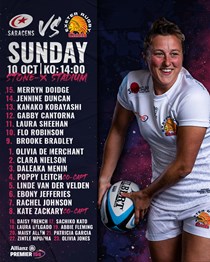