With the cobwebs blown away in last weekend’s victory over Loughborough Lightning, Head Coach Susie Appleby will be hoping that her side can be fast out of the blocks, as they take on Saracens in the Allianz Cuip at the Stone-X Stadium tomorrow (2pm).

The Chiefs put themselves in prime position to qualify as group winners after last weekend’s victory, but know that any slip up away at the current league leaders will open the door for the Londoners to jump ahead of them in the group.

The Stone-X is a ground that Exeter are yet to taste victory at, but Appleby maintains that the focus, as always, has to remain on her side.

“Saracens is always a tough place to go, regardless of whether it’s in the league or the cup. Whoever is on the field for them is pretty irrelevant. We just need to keep the focus on ourselves again. That’s what we’ve been talking about this week,” she said.

Reflecting on last weekend’s performance against Loughborough, Appleby admitted that she was left frustrated by elements of her side’s performance in the first half, but was proud of how her side upped their levels in the second half.

“The girls have trained well this week. It was a disappointing first half last week and we gave the ball up a bit too easily. But we were very pleased with the second half, so hopefully we can take that into our performance on Saturday,” Appleby explained.

With the Chiefs fighting on two fronts still at the business end of the season, Appleby has challenged her side to find “more consistency in what we do.”

“It’s about being calm, methodical and not getting overexcited. We know that we can be really good but on Saturday it will be about making sure those fundamentals are right. I always say it, but the breakdown will be so important. It’s an area that Saracens always excel at and whoever is on the field, they always want to get over the ball.

The Cup has allowed Appleby and assistant coach Steve Salvin to utilise their whole squad and build depth, but it has also allowed them to reintegrate the likes of Gabby Cantorna and Brooke Bradley after injury.

American international Cantorna impressed on her return to the field last weekend, picking up the Player of the Match award and Appleby is pleased with how her side are progressing.

“Gabby didn’t look like she’d been away, which is really pleasing. There were some other combinations that also started to settle. With another week’s training behind us, we should be good on Saturday.”

Ahead of kick-off Appleby has made several changes to her side with Megan Foster taking the reins and fly-half in place of Patricia Garcia and international colleague Jennine Detiveaux returning on the wing.

Appleby has been delighted with how Foster has performed in recent weeks and believes that the USA Eagle has earnt the chance to stake her claim for the jersey.

“Meg’s been doing really well. She had a good performance in the last two games and then went away to link up with the USA for a bit. Pat came in and had been training with a little bit more consistency, so she was able to have a run in the team. But that’s what this cup competition is all about,” Appleby noted.

“The thing about Gabby, Meg and Pat is that they are all outstanding kickers, which adds an extra dynamic to the equation. The players are excited but they’re also feeling a bit of pressure for shirts, which is where we want to be.”

Appleby sees tomorrow’s match as a “brand new competition,” with her side looking to seal a semi-final berth. With the business end of the season now well underway, the Head Coach explained how it was a “privilege” for her squad to be able to keep taking to the field.

“We approach it like it’s a brand-new competition, as both pools are pretty tight at the top. Every time you get to go on the field is a massive opportunity and a massive privilege. That’s what the girls are feeling, and they’re excited to play, which is all you can ask for really.”

With the games coming thick and fast in the cup, before the home run of the league campaign, Appleby is excited by the strength in depth within her squad, explaining how players need to be ready to step into the side if injuries occur.

“You’re looking at not too many weeks left to go. There will be so many important moments within that and within those games. Training goes up another level, as does the competition for places. We’re able to give people opportunities and see what they make of them. If you pick up an injury at a critical time, then you need someone to be able to jump straight in and fill the breach.”

Whilst Appleby insists that “Saturday remains the main focus for now,” she was buoyed by the opportunity in front of her side and the chance to challenge for the Allianz Cup title.

“It's a trophy, it’s as simple as that. We’re going up to Saracens to do the best job that we can and we’ll see what comes out of it.” 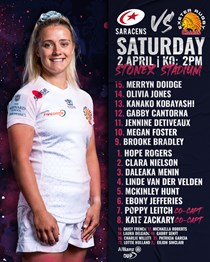