Former Exeter Chiefs winger Tom James has today announced that he will be retiring from the professional game after 14 seasons of duty. Picture: Getty Images

Former Exeter Chiefs star Tom James has today announced his retirement from professional rugby, bringing the curtain down on a playing career which has spanned 14 seasons.

The former Welsh international, who has spent this season plying his trade with Pro14 side, the Scarlets, joined the Chiefs in the summer of 2013 from the Cardiff Blues.

A proven finisher during his seven-year stay in the Welsh capital, it was little wonder that Chiefs’ head coach Rob Baxter saw the powerful back as a quality addition to the playing ranks at Sandy Park.

During his two seasons in Devon, James featured 39 times for the Chiefs, scoring seven tries in the process. However, the chance to return back to the Principality and with the Blues was an offer he did not want to refuse.

He said at the time: “"I've enjoyed my time at the Chiefs, making not only a lot of good friends, but a lot of memories as well. I can't speak highly enough of the club and how they have helped to improve me as a player.

"Obviously, I'll miss everyone associated with the Chiefs - and that includes the supporters - who have been brilliant with me from day one. It wasn't an easy decision to make, but I have a huge affinity with the Blues and at this stage of my career it's a good move for me."

Returning to his former club, where he amassed over 100 appearances and is the club’s record try-scorer, James was quickly back in scoring form and his efforts saw him recalled to the Welsh national squad, featuring in the Six Nations Championship in 2016 where he won the last of his 12 Test caps.

In 2018, though, the 33-year-old took a break from the professional game and has since talked openly about his battle with depression. He later returned to rugby, making a lone appearance for the Blues and featuring for Merthyr, Pontypridd and Cardiff in the Welsh Premiership before joining the Scarlets at the start of the current campaign.

Speaking today, James said: ““With a lot of time to think, I’ve made a decision to retire from professional rugby. I have loved the opportunity that the Scarlets have given me this season. It’s been an awesome experience meeting new players, coaches and staff who will be friends for life.

“Looking back, I have some wonderful memories over the last 14 years; from signing my first contract at Cardiff Blues, running out onto Twickenham to make my Wales debut against England in 2007 and the couple of seasons I had with Exeter Chiefs.

“I have been fortunate to have been coached by the best coaches and have played with some of the best players in the world, including my idol Gareth Thomas (Alfie).

“To all the supporters, the rugby family as a whole, I can’t thank you all enough, but the biggest thanks of all goes to my own family, friends and the many people who have helped me through my career.” 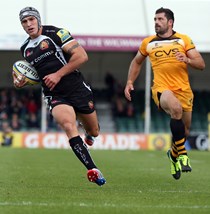