Hill is his own worst critic

Exeter Chiefs lock Jonny Hill is missing day-to-day life with the Gallagher Premiership leaders, but says he can't wait to get back into the thick of the action. Picture: www.jmpuk.com

Jonny Hill is doing his best to keep calm and carry on during the lockdown. But the Exeter Chiefs lock is also itching to throw his 6ft 7ins frame back into the day job and play matches that could yet see Exeter home-in on a domestic and European double, given a season restart in July and August.

Hill and his fellow Chiefs are well placed at the front end of both competitions, which explains why he is reluctant to contemplate the league season being abandoned, as it has been in France’s Top 14.

Exeter have a five-point lead over Sale Sharks at the top of the Premiership, as well as a home European Cup quarter-final against the south Manchester club.

There is also the pressing matter of Hill, whose line-out command and exceptional mobility made him the outstanding lock in the Premiership pre-lockdown, persuading England coach Eddie Jones that he is a ready-made replacement for the Japan-bound George Kruis.

As Hill contemplates the road ahead he says: “I’m missing the Monday to Friday training, and the matches, but there are really important issues concerning health in the world now, and all we can hope is that entertainment, whether it’s sport, or other forms, will follow when it can.

“Of course, I hope we can finish the season and get some reward. If it happens in July or August then the following season could be pushed back by two weeks, as happened after the World Cup.” 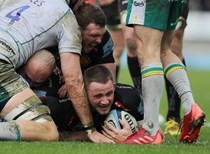 Jonny Hill scores for the Chiefs against rivals Northampton Saints

Ask Hill, 25, what makes Exeter tick, and he says that there is unfinished business for a club that has featured in four Premiership finals, becoming champions for the first time three years ago after beating Wasps, but finishing as runners-up to Saracens on the other three occasions.

“Everyone is hungry, everyone wants to improve – and as a group we feel that we have yet to hit our peak. The players are hungry, and a lot are still striving for international

honours, and the coaching staff have ambitions they still want to achieve.

“I just want to play, and if we had to start next season after a couple of week’s break, I guess we will have to do that. We are lucky at the Chiefs because we get looked after very well in terms of rotation and rest.”

Hill says that the idea of playing in front of an empty stadium would not faze him.

“I would definitely rather play behind closed doors than not play at all. It could also be pretty entertaining because in empty stadiums we will be able to hear the coaches losing their rag!”

The other significant factor in Hill’s rugby life is that the brakes have been put on his ambition to become a regular in the England squad.

Hill had an induction course in 2018 when the Chiefs’ second row was selected for the summer tour of South Africa, but the closest he came to international action was making the bench as an unused replacement for the third Test win in Cape Town.

Then, during the 2019 World Cup preparations he was squeezed out of the running by Charlie Ewels, and again, in this season’s EPS, he was left out when Jones opted for Ewels and Northampton’s Alex Moon.

However, although Hill says that he does not consider the South Africa tour to be a lost opportunity, he admits it has galvanised him.

“It came after a good season with the Chiefs, so initially after being selected to tour I thought I was in Test contention and would give it my best shot. I eventually got into the match 23 for the last Test, but the team comes before the individual, and that day only two came off the bench.”

At the end of the tour Hill says Jones gave him some pointers: “He said that I was still a young player who hadn’t played loads of rugby at that level, and the general message was to ‘just keep improving’.

“Since then I’ve worked on my line-out calling, as well as my speed off the floor and across the ground as a jumper. I’ve always enjoyed the line-out, and it’s not something I had to work too hard at early on, because as a kid it came naturally to me – but I certainly put in the hours now.”

He says it led him to this conclusion: “It’s all very well being called up to an England squad, but there’s a difference between being called up, and being able to thrive – and I feel ready for that now.”

The notion of a Lions tour squad being incomplete without the occasional bolter also appeals to Hill, as does the chance of being on the outer reaches of Warren Gatland’s radar.

“If you play for a successful club with a good pack in big games then there’s a chance. The Chiefs have kept improving, so I’d like to think that if you’re playing well in competitions like the European Cup and the Premiership, you might be in the frame.”

Hill says that last season’s epic Premiership final showcase against Saracens is a case in point, but when questioned whether he took the knife-edge loss hard, or flicked the switch and moved on, it is clear it took some digesting.

“It was a long summer – and in that five-week break I wanted answers to how that happened, and what went wrong, so I had a good look at the match. It was tough to take because there was so little in it right until the final whistle, but credit to Saracens, who are a great side.”

The final saw Hill, who comes from Ludlow in the Shropshire hills, hold his own against Maro Itoje, who he has known since they were in the same England U20 side in 2014.

However, Hill whose path to England U20 honours took him from mini rugby at Luctonians and playing for Ludlow School, to Hartpury College and the Gloucester academy, missed out on the 2014 World Junior Championship title run in 2014, when Itoje captained them to victory over South Africa in Auckland.

Hill played in the last two matches of the preceding England U20 Six Nations campaign before sustaining an ankle injury serious enough to keep him out of the game for the next 18 months – during which time he was approached by Exeter. 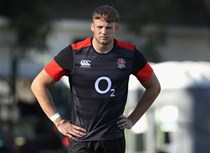 He recalls: “I was training at Hartpury but got dropped off the top of a line-out and went over on my ankle. It was a mess, and took a long time to sort out – and after I got a call to have a chat to Rob Baxter down in Devon, I made the move to the Chiefs.”

He says that Itoje’s stellar career since then has not surprised him. “It’s been a steep curve, but even at U20 level he would do things that others could not – he was always ahead.”

Yet, Hill believes that the world’s best lock is the New Zealander, Brodie Retallick. “He’s the one at the moment, because he combines all-round physicality with very strong set-piece work and great ball-handling.”

Suggest to Hill that one of the assets he has in common with Retallick, and Itoje, is terrific mobility, and the picture of the Exeter lock as a long- limbed laid-back character takes a sudden turn into perfectionist territory.

“When I watch myself, I always cringe. I see faults, rather than good things, and I am my own worst critic. I don’t much like the sound of my own voice when I hear it recorded, either. I never see anything I like, really.”

It is a driven mentality, and one which defines the Chiefs as much as the community-based family spirit surrounding the club. However, Hill says it differs from the old school training ground spats that were part of the culture at clubs like Leicester.

“We train hard, but there’s a difference between being competitive and being a sh*t bloke, and taking cheap shots at your team-mates. Sometimes, in the heat of the moment it might boil over in training, but here we don’t say it’s Tuesday training, so it’s time for the weekly dust-up.”

Just how legitimately abrasive it can be is highlighted by this Hill anecdote about Jannes Kirsten, Exeter’s recent South African lock signing from the Bulls.

“Soon after he got to our place he wrote off three guys in training, and we had tell him to rein it in. It was a combination of physicality and bang-on timing in contact, because he had come from a match environment in South Africa to pre-season here.

“He’s really impressed me. He’s very fit, and there are times because of the way he gets around the pitch that I ask myself, ‘how did he get there?’”

The main influences on Hill’s career have been varied, and include having Paul Loughlin, the former St Helens and Great Britain Rugby League star centre of the mid-1980s to 90s, as an uncle.

“Paul is mum’s twin brother, so I watched a lot of Rugby League growing up, and I wanted to be like him. He stays in contact, watches as many games as he can, and still gives me a few work-ons.”

The encouragement given to Hill at 17 by Simon Green-Price, his colts coach at Luctonians, to go to a walk-up trial at Hartpury College, is another cherished memory because it became the springboard for his pro career. He calls it, “one of the best things I’ve done”.

Hill also talks about the positive impact Exeter forwards coach Rob Hunter has had on his development. “Rob is a rare coach because he can see both sides of the story. He sees the player’s perspective as well as his own as a coach.”

From the perspective of the fans at Sandy Park, and from further afield, there will be great expectations that when this lockdown ends and the fight for club titles and places in the England second row is renewed, the Exeter lock will be leading the charge.

Here’s hoping that when that time comes Jonny “The Perfectionist” Hill watches an action replay of himself and finally finds a clip he likes.