Exeter Chiefs forward Jonny Hill insists he will be 'fighting to the end' after it was confirmed today he will depart the club at the end of the season to join Gallagher Premiership rivals Sale Sharks.

The 27-year-old England and British & Irish Lions will leave Sandy Park after a six-year stint, during which time he has helped the club to win both the Premiership and Champions Cup crowns.

Having started his rugby at local club Luctonians, it was at the age of 17 that Hill was encouraged by colts coach Simon Green-Price to turn up to a walk-up trial at nearby Hartpury College. 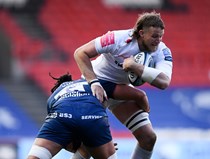 Hill was an instant hit and within a few months he was a first-team regular at the National League Two South side and on Gloucester’s radar. He spent two seasons playing with Hartpury College and also had two run-outs for Gloucester in the LV= Cup, where his form also brought him into the England Under-20s set-up, where he featured twice until an ankle injury brought his career to a halt.

With his contract at Kingsholm drawing to a close, the Ludlow-born youngster switched his attentions to Devon to further his career. Already known to forwards coach Rob Hunter, Hill quickly settled into his new surroundings at Sandy Park and made his first team debut in January 2016, coming off the bench against his former club.

Now, with over 100 games for the club, Hill's on-field form was rewarded by not only helping the Exeter Chiefs to double success in the 2019/20 season, but a first Test cap for England in the Six Nations Championship. He impressed on debut for Eddie Jones' side and added to his tally of caps during the subsequent Autumn Nations Cup.

Such was his form at Test level, Hill was one of four Chiefs players named by British & Irish Lions head coach Warren Gatland for the summer to South Africa. Although he didn't feature in any of the three test matches, he did feature in a number of the warm-up fixtures against some of South Africa's leading club sides.

A key cog in the well-oiled Chiefs pack, his loss will certainly be felt by the Devonians.

For Hill, though, the time has come for him to start a new chapter in his career.

"It's hard to put into words how I feel right now," said Hill. "The journey that I have been on with the Chiefs has been unbelievable. The player that arrived all those years ago to the player that will leave at the end of the season are two completely different things.

"Since the moment I arrived, everyone at the club, the supporters, the city itself, they've all made me feel so welcome. To decide to move on has been one of the hardest decisions I've ever had to make, but sometimes good things have to come to an end.

"I am extremely thankful to Tony Rowe, Rob Baxter and everyone associated with the club for making my time here so enjoyable. The memories we have made, winning the double, playing in big European and Premiership games, it's hard to sum up what all that means to me.

"For me, I'm grateful that my future has now been sorted, but between now and the time I leave, I know I will be fighting to the end and giving everything I can to the club."