Exeter Chiefs and England star Henry Slade has enjoyed a phenomenal 2020, which included success with club and country, as well as becoming a dad for the first time. Picture: www.jmpuk.com

Henry Slade is relishing the prospect of making his Exeter comeback against Bristol on Saturday to kick off a year he hopes will see him earn a place in the British and Irish Lions squad.

The centre is among the England internationals returning to action after a rest period as the Chiefs, the Gallagher Premiership champions and leaders, host a Bears outfit who are level on points with them in second.

“I’m actually really excited,” Slade said. “It’s been a little while. But we’ve had the mandatory rest now, we’re back, we have a big game this weekend, and what a way to start back.”

As to where 2021 might lead, the 27-year-old, holder of 34 England caps, is regarded as a major contender to make the Lions squad for the Tests against South Africa.

Asked about how big a deal the Lions is for players of his generation, Slade said: “It’s massive, something every player wants to do and strives towards.

“If you worry about things that are too far in the future, then you miss out on what is right there in front of you – I’ve learnt that over the years. I’m just going to focus on Bristol this weekend, then the next game, the next game, and see where it takes me.”

While the Lions are currently scheduled to tour South Africa this summer, there is doubt over the series taking place as planned due to the coronavirus situation in the country.

The PA news agency understands playing the series in the UK and Ireland is one of three contingency plans under consideration, with the feasibility of a postponement until 2022 and pressing ahead on with the current itinerary but holding the games behind closed doors also options being examined.

Slade admits that while tours are “special”, if he was playing for the Lions he “wouldn’t care where”.

He said: “I’ve never been on a Lions tour and it is every player’s dream to do that. I think the experience of being on a tour and being away with a group of lads is a special thing. For it to be in England would be a bit odd, I guess it would feel a bit strange. But I can’t complain – if you’re getting picked for the Lions, which I’m trying my best to do so, I wouldn’t care where it is.”

Slade’s 2020 included helping Exeter win the Champions Cup and Premiership on successive weekends in October, then England win the Six Nations title and the Autumn Nations Cup in the two weeks that followed.

“That was an unbelievable few weeks,” Slade said. “It would make it all that (more) sweeter if there were fans there to experience it with us, but I can’t complain with winning that many trophies in that short a time. It’s probably never going to happen again – playing Six Nations in October and that sort of thing. Winning that was unbelievable, but we’re hoping to try to sort of emulate that again.” 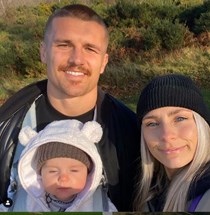 Henry and partner Megan alongside their daughter Olive

In August Slade’s partner Megan gave birth to their daughter Olive, and he added: “It was a really good year for myself. Obviously I understand there has been a lot of trouble for a lot of people and it’s been a bad year for a lot. But I can’t have too many bad words to say about it.

“My daughter being born was the best day of my life and changed it completely and an unbelievable experience. We are enjoying every part of it – even changing the nappies.”