It will be a while before these two Gallagher Premiership heavyweights embroil in on-field battle again.

Therefore, it’s Saracens who will claim the slender bragging rights until that time, after they ended Exeter Chiefs’ impressive winning streak since rugby restarted last month.

The defending champions showed they won’t leave the top flight quietly, sinking their arch rivals with an impressive five-try display in the nation’s capital.

Tries from Rotimi Segun, Dom Morris, Elliott Obatoyinbo, Janco Venter and Cameron Boon were the highlights for the hosts, whose remaining points came courtesy of the boot of fly-half Manu Vunipola.

For the Chiefs, the hurt of losing three Premiership finals to the same opposition remains as painful as ever, but this latest setback won’t in any way dent Rob Baxter’s side ahead of a crucial six-week block that remains.

Tries from Facundo Cordero, Will Witty and Dave Dennis gave the visitors a smidgen of positivity on an afternoon where the power-play of the Londoners was clearly evident.

With home advantage in next month’s play-offs already guaranteed ahead of kick-off after Wasps defeated Bristol Bears, the pressure was somewhat off the youthful Chiefs ahead of this latest encounter.

No doubt with one eye on next week’s European quarter-final against Northampton Saints, Baxter took the opportunity to again utilise his squad to the full, handing first Premiership starts to a host of his players.

Up front, five of them (Keast, Innard, Petch, Witty and Price) were given the nod from the outset, as were half-backs Joe Snow and Harvey Skinner, centre Tom Wyatt and winger Cordero, the latter of whom was pulling on a Chiefs jersey for the first time.

Like the Chiefs, Saracens also had more than a passing interest on European matters, Mark McCall’s side are due to tackle top seeds Leinster in their last eight encounter at the Aviva Stadium next weekend.

They too went with a youthful-looking line-up, made up of fringe first-teamers, coupled with the odd dose of senior experience.

And it was skipper Callum Clark who led the home side’s opening attacking burst which, after five minutes, brought them the opening points of the game.

Using their pack to punch decent holes in the Exeter defensive line, the ball was eventually worked wide through the lively Tom Whiteley to Vunipola, whose looping pass found Segun in space and he was able to coast over unopposed for the opening try.

The home lead, however, proved shortlived as the Chiefs - with their first meaningful attack of the game - restored parity with a try of their own. This time it was the visiting pack who worked their way through the phases, eventually winning a penalty under the home posts.

Hooker Jack Innard - as has been the case in recent weeks - took the tap penalty, five metres out, and although he and others were held just short, the ball was eventually spun wide via the hands of Tom Wyatt and Phil Dollman to Cordero who, like older brother Santi, needed no second invitation to find the try-line. 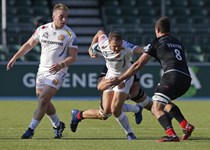 Tom Wyatt goes on the attack for the Chiefs against Saracens

With little to choose between either side in the heat of the capital air, Vunipola saw a lengthy penalty cannon back off the post, before he atoned on 36 minutes when the visitors were penalised for not rolling away at the ruck.

Then, with the last action of the half, the England Under-20s playmaker - the younger cousin of Sarries and England duo Mako and Billy Vunipola - added the extras to a second home try, scored this time by Morris, who cut a lovely line through the heart of the Chiefs midfield to score by the posts.

It was a sucker punch for the Chiefs to take right on the stroke of half-time, but they were by no means out of contention as the two teams headed for the sheds.

The second half was just three minutes old when the Londoners extended their advantage, Vunipola adding a second penalty after referee Adam Leal again pulled up the Chiefs for infringing at a ruck.

Up against it, Baxter’s youthful charges needed to summon a rapid response. This they did, bagging a second try of the afternoon through Witty, who was able spin out of contact five metres out, before burrowing his way over the whitewash to reduce the deficit.

In an ideal world, this would have been the catalyst for the Chiefs to kick on. Sadly, it was Saracens who - aided by some hefty bulk from the sidelines - who turned the screw on their rivals.

A third Vunipola penalty kept the scoreboard ticking along nicely, before Obatoyinbo squeezed over in the corner for a classy score. The winger provided the flying finish to a slick home move that started down the left with Alex Day’s clever break and was then worked back inside to Vunipola, whose cross-field kick fell invitingly into the path of Obatoyinbo. Still with a bit to do, the speedster stepped inside Josh Hodge, before diving - Superman style - over the line.

It was ruthless stuff from the defending Premiership champions, but they weren’t finished there. A hefty shove on a Chiefs scrum five metres from their own line, saw the home side push their rivals off the ball, allowing recent signing Venter to claim his first for the club. Initially, the officials weren’t quite sure of the grounding, but after multiple reviews on the big screens, the bonus point score was awarded with Vunipola converting to make it a maximum haul.

Again, the Chiefs looked to fashion a response of sorts, scrum-half Joe Snow slaloming his way through the middle and towards the line, only to be pinged for holding on with the home try-line within sniffing distance.

Sarries made the most of the let-off and in their next foray down field, they bagged a fifth converted try when replacement Boon drove over from five metres following a sustained spell of home pressure.

To their credit, the Chiefs - who emptied their bench in the final quarter, handing Premiership debuts to University of Exeter starlets Matt Johnson, Will Yarnell and Luke Mehson - kept going until the death.

Winger Mehson looked particularly lively with a couple of clever busts, whilst it was Yarnell who provided the scoring past for Aussie international Dennis to canter over for a consolation score. Harvey Skinner obliged with the extras to ensure it was a full bounty for the visitors.

For the Chiefs, the season really starts from here. Next Sunday’s European showdown offers the first acid test of the heavyweight games to come between now and the end of the season. Expect a much different Exeter to take to the field, but let’s give praise to those who featured here at Allianz Park. The stockpile of talent looks good, long may it continue!