Harry Scott-Munro at the StoneX Stadium

A powerful first half display from Susie Appleby’s side saw them storm into a 21-10 lead at the break as Gabby Cantorna converted tries from Rachel Johnson (2) and Sachiko Kato.

The second half, however, proved a much-different affair as the star-studded Londoners hit back to not only extend their lead at the top of the table, but at the same time gain revenge on the Devonians, who in January ended their 33-game unbeaten streak in the division.

The Chiefs came into the game off the back of an impressive victory against Wasps last time out, but were forced into something of a reshuffle in the side following injuries picked up in training this week. Kate Zackary moved to centre, Linde Van der Velden returned to captain the side at No.8, while Patricia Garcia moved to fly-half with Taylor Black sidelined.

For Saracens, last week’s 47-18 victory over Sale Sharks helped them open up a six-point gap at the top of the table and they came flying out of the blocks in this latest fixtures, as Zoe Harrison and Sarah McKenna peppered the backfield and kept the Chiefs hemmed into their 22.

Their persistence in keeping the Chiefs stuck within their own half paid dividends, as they opened the scoring through a Harrison penalty. However, it could’ve been more were it not for a superb one-on-one tackle from Garnet Mackinder on Emma Uren to deny the Saracens winger a run-in out wide.

The Chiefs struggled to get a sniff of possession in the early exchanges as Saracens controlled the pace and the tempo. Indeed, the hosts were to increase their advantage with little over 10 minutes on the clock, as flanker Vicky Fleetwood found a mismatch in midfield and worked the ball to Uren who raced clear. Garcia put in a brilliant last-ditch tackle on Uren, but Saracens regrouped and crashed over through Donna Rose, Harrison adding the extras for an early 10-point advantage.

A trademark of Appleby’s side this season has been their desire to never give up and they showed that in abundance as they edged their way back into the game, pouncing on ill-discipline from the hosts to get themselves into attacking positions. After a beautiful initial sniping run from Flo Robinson, the Chiefs built the phases as Saracens continued to give away penalties. The pressure eventually told, with Johnson crashing over after a strong initial burst from Van der Velden, Cantorna converting.

Discipline continued to cause issue for Sarries, who received two yellows in two minutes as first, May Campbell saw yellow for a hair pull on Olivia DeMerchant, before Eloise Hayward headed to the sidelines for repeat breakdown infringements.

With a two-player advantage, the Chiefs used the extra players to their advantage, Japanese prop Kato crossing after another strong bust from the pack, Cantorna again adding the extras for a four point lead.

They were to score a third right on half-time, as a scything break from Zackary left Saracens at sixes and sevens, compatriot Johnson burrowing over for her second score, Cantorna converting to open up an 11-point lead at the break.

On the resumption, Sarries – just as they done in the first half – started brightly with Harrison slotting an easy penalty for her side after the Chiefs were penalised at the breakdown.

At the other end, the visiting pack went to work, hammering at the Saracens line, only to be penalised when it looked like one more carry would result in a fourth try.

Momentum is the key in rugby and that moment seemed to spur Saracens on. As Chiefs began to concede breakdown penalties, the hosts reduced the deficit to a solitary point after a stunning angle from captain Lotte Clapp caught the Exeter defence cold, in a carbon copy of her score at Sandy Park.

Then, with 15 minutes to go, Saracens hit the front as Vicky Fleetwood bundled the ball over from close range, after another penalty against the Chiefs had put Saracens with five metres of the try-line.

Exeter still had opportunities, but whereas in the first half they stuck, little errors were compounded in the second-half. Having got themselves to within 15m of the Saracens line, the Chiefs were guilty of coming in from the side and the chance was lost.

Saracens proceeded to march their rivals backwards as their experience began to show, their bonus-point try coming five minutes from time from May Campbell. Harrison’s conversion opened up a 13-point lead for the hosts as they looked to suck the life out of a Chiefs team that were still determined to come away with points for their efforts.

Although they did their best to rescue some reward in the dying embers, it was not to be for the Chiefs, who must quickly regroup for next weekend’s crunch clash with Loughborough Lightning at Sandy Park. 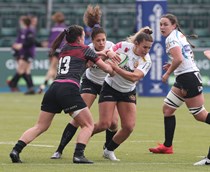