Exeter Chiefs Luke Cowan-Dickie celebrates turning over possession during his side's 14-7 victory over Saracens in the Gallagher Premiership. Picture: www.jmpuk.com

Exeter’s win over Wasps at the end of November meant the Chiefs head into December in third spot in the Gallagher Premiership, four points adrift of leaders Northampton Saints and two shy of next-best Bristol Bears.

The festive month, though, saw Rob Baxter’s side resume their Heineken Champions Cup campaign with the traditional double-header, this time against league rivals Sale Sharks.

Injuries to club captain Jack Yeandle and fellow hooker Jack Innard meant Baxter was forced into the loan market, drafting in all-action South African forward Kyle Cooper from Championship outfit Newcastle Falcons, while Wales and British Lions winger Alex Cuthbert was forced to undergo surgery on a serious hamstring injury sustained in the European away win over in La Rochelle.

For those fit for duty, it was Europe that dominated their focus first up, particularly having started their latest campaign with impressive bonus point wins over La Rochelle (away) and Glasgow Warriors in their opening two games.

Baxter assembled a powerful line-up for the flight up to Manchester to face Steve Diamond’s side at the AJ Bell Stadium.A storming start to the contest, which included a penalty try and a first-ever touchdown for the club for Stuart Hogg, saw the visitors take hold of a contest, which got even better later in the half as Luke Cowan-Dickie claimed a third try to give them a 22-13 lead at the break.

In a tight second period, the Sharks cut the deficit with a converted score from skipper Jono Ross, but the Chiefs were able to hold off a spirited late charge from the Sharks to head home with their unbeaten record firmly intact.

Stuart Hogg dots down for his first-ever Chiefs try in the Heineken Champions Cup win at Sale Sharks. Picture: www.jmpuk.com

With the Sharks set to return to Devon waters the following week, the Chiefs had two pieces of good news during the build-up to help keep spirits high within the camp. First, winger Tom O’Flaherty was crowned the Premiership’s Player of the Month for November, whilst a day late it was confirmed Baxter and fellow coaches Ali Hepher, Rob Hunter and Ricky Pellow had all agreed new long-term deals with the club.

That feel-good factor continued into the weekend in the second instalment of Europe for the Chiefs, who with a bumper home crowd packing inside Sandy Park, once again saw off the challenge of the Sharks to move within touching distance of qualification into the last eight of the Champions Cup.

A brace of tries from Sam Simmonds, another from his brother Joe, Jack Nowell and Ben Moon – on his 250th appearance for the club – enabled the Chiefs to secure an emphatic 35-10 victory on the day.

Post-game, Baxter gave his assessment of his side’s display, insisting that there is still ‘more to come’ from them moving forward.

He said: “Obviously, I’m very pleased with the result and a lot of what we did out there today. That said, the players still feel they are growing as a team and that there is more to come from them.

“They are down there now in the changing rooms saying ‘well done’ to one another, but as a group they all feel there is a bit more to grow in terms of what we can achieve together. Elements of what we did today – and the mistakes we made at times – a lot of that was down to the players showing that little bit of desperation to do well, rather than Sale really causing us any major issues.

“Sometimes being that desperate doesn’t bring the best out of us. However, I’d much rather have that as a work-on as opposed to us not committing flat out physically to the game. I know when we commit flat out physically, we don’t tend to lose many games of rugby.”

With the Chiefs four from four in Europe, it was back to domestic action for the fixture leading into the Christmas period. First up, English rugby’s most decorated club side, Leicester Tigers, lie in wait at Welford Road.

Included in the visiting line-up were recent recruits Cooper and Enrique Pieretto, both of whom would get their first taste of first-team action with the Chiefs, plus Henry Slade who took on the captaincy duties for the first time.

Sadly, Slade’s afternoon would be cut short through injury, but he was able to watch from the sidelines as his team-mates recorded a sixth successive victory, taking them to the summit of the Premiership for the first time this season.

Jannes Kirsten gave the Chiefs a dream start, scoring the first of their four tries inside the opening five minutes, but back roared the Tigers, who hit their rivals with a brace of tries from Jonny May (2) and Jordan Taufua.

Don Armand scored either side of the break for the visitors, before Jonny Hill helped put the icing on the cake, powering his way over in the final quarter to seal all five points.

“After half time we aligned ourselves a little bit more like an Exeter Chiefs team,” said Baxter in his post-match press conference. “That was always going to take a half of rugby to do that, especially with the amount of changes we made. However, as we got used to each other, and the leaders manipulated what everyone was doing and got us back online, we looked a million dollars in that second half.

“That last 10 minutes, once we had created that little bit of a lead, I thought we looked at our best defensively, when in fact we should have looked most under pressure. If you saw us, we just kept pushing Leicester back at every opportunity. Ideally, I’d like to have seen us do that all day, but that can be a work-on that we have to keep adding.”

On top of the table, it was just the lift the Chiefs needed ahead of their much-anticipated showdown with defending champions Saracens in the final game of 2019.

Ahead of that fixture, Exeter Rugby Club chief executive, Tony Rowe OBE, heralded another “fantastic’ year - on and off the field - after the Devon club consolidated its position as England’s only profitable top-flight rugby club.

In what was another record-breaking trading year at Sandy Park, the release of the club’s annual accounts underlined just how successful the past 12 months have proved.

Fine and dandy off the field, Baxter’s side would show equally impressive outcomes against Saracens, the side that had pipped them to a second league gong earlier in the year at Twickenham. 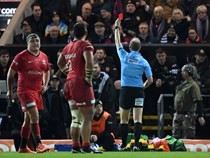 With the Londoners fixed firmly to the foot of the table having been found guilty of breaching the Premiership’s salary cap, there was a nice edge to proceedings ahead of this latest match-up between English rugby’s two leading lights in recent years.

Roared on by a record crowd of 13,593, the Chiefs did not disappoint as they looked to finish the calendar year top of the pile.

Nic White’s converted first half try gave the Chiefs a 7-0 lead at the turn, before that was doubled when South African flanker Jacques Vermeulen rumbled over for his maiden Premiership score after the break.

With the game heading into its dying embers and tensions high, given comments made in the wake of Saracens being found guilty of breaking the league’s strict salary cap regulations, it wasn’t until three minutes from time that on-field matters eventually spilled over.

A touchline brawl saw players from both sides embroil themselves in a decent dust-up, the results of which gave Saracens the penalty from which they eventually claimed their only try – and saw Exeter’s England prop Harry Williams, already off the field having failed a HIA assessment, red-carded for his role in the mass melee.

Thankfully, the Chiefs were able to hold out for the win, a result which left a beaming Baxter able to toast another successful year for the Devonians, who had entered the decade as an ambitious Championship outfit, keen to cut their teeth amongst English rugby’s elite, and now ended it sitting top of the tree in the Gallagher Premiership.