Exeter centre Sam Hill scored two tries in the Chiefs first win of the year away to London Irish in the Gallagher Premiership. Picture: www.jmpuk.com

Having ended 2019 with victory over defending Gallagher Premiership champions Saracens, the New Year began with the news of some ramifications following the fall-out of that fixture.

Although victorious at Sandy Park, the latter stages of the contest saw tempers flare, including Chiefs and England prop Harry Williams being shown red by Wayne Barnes for his part in the melee.

Williams’ antics, though, would see him appear before the RFU’s disciplinary panel, who handed him a two-week ban.

If that was the downside of the opening days of the month, the positive was Director of Rugby, Rob Baxter, confirming the signing of Scotland international Jonny Gray on a two-year deal from Glasgow Warriors.

A long-term admirer of the powerful second-row forward, Baxter said of his new recruit: “When you track a player for three or four years, like we have with Jonny, you tend to see a lot of them. Even when I can’t sign someone initially, I will still keep an eye on them and just see how things develop.

“In Jonny’s case, I’m more than confident he’s the right kind of player for us and he’s one of those guys that will give us that ability to be even better in both the Premiership and Europe over an extended period.”

With a new signing in the bag, it was back to the on-field action for the Chiefs, who kicked off 2020 with a testing away trip to London Irish, returning to the top-flight following their one-year stint in the Championship.

In a dominant first half display from the visitors, converted tries from Sam Hill, Luke Cowan-Dickie, Dave Dennis and Ollie Devoto saw them establish a 28-5 lead, before Hill raced over for his second of the game early in the second half.

What followed, though, will not have impressed Baxter, who saw his side leak two quickfire tries through Albert Tuisue and Ollie Hassell-Collins, before the Chiefs rallied once more to create a sixth score. Sam Simmonds, a thorn in the home side all afternoon, began proceedings before shipping a pass to Hill, whose clever offload allowed Stu Townsend to race under the posts.

Exeter were certainly in the box seat, but when they lost backs Olly Woodburn and Devoto to yellow cards - both for deliberate knock-ons - all of a sudden Irish had a decent numerical advantage. Like all good sides, they duly made their rivals pay, bagging a bonus point score of their own when they exploited the space out wide to send Steve Mafi over for a converted try.

Irish did their best to haul in the Chiefs during the final quarter, but their efforts were in vain and it was Exeter who headed home with a full haul of points.

The Chiefs were momentarily on the ropes, but when they regrouped back deep inside the Irish half, they worked hard in attack to win a penalty, which Steenson duly dispatched to complete an unblemished afternoon with the boot.

Scottish international Jonny Gray confirmed he would be joining on a two-year deal. Picture: Getty Images

Back at Sandy Park, the Exeter Chiefs Foundation, the club’s official charity, benefitted to the tune of £350,000.

The six-figure sum was donated to the Foundation by the club’s board of directors, who voted unanimously to hand over the share of money provided to the other 12 Gallagher Premiership clubs, including the Chiefs, following the fine imposed on Saracens after being found guilty of breaching the league’s stringent salary cap regulations.

The Irish win meant the Chiefs maintained pole position in the standings heading into the final two rounds of the Heineken Champions Cup, where the club were now in touching distance of reaching the quarter-finals for only the second time in their history.

First up was a trip North of the Border, where Glasgow Warriors lay in wait in Round Five. In what was a first return back to Scotstoun for Stuart Hogg, all eyes were on the gifted full-back ahead of kick-off.

Up against a spirited Warriors side, who themselves still harboured hopes pre-game of progression in the tournament, the Chiefs showed their growing maturity in this hard-fought display, which eventually ended 31-31. 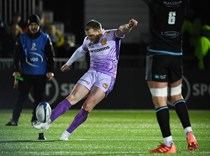 Not only did they overcome a lightning fast start from the Scotsmen - one in which they scored tries through Tommy Seymour and Huw Jones - but they also had to withstand a heavy late barrage when the game was ebbing and flowing faster than the nearby River Clyde.

In between all of that, the Chiefs were hard-nosed in their approach, claiming tries through Nic White, Matt Kvesic (2) and Jacques Vermeulen, plus the remainder of their points through the boot of fly-half Joe Simmonds.

Even then, Baxter’s braves could have won it at the death when Hogg saw a 60-metre penalty chance cannon back off the crossbar with the very last kick of the game.

As it was, the Chiefs had secured the necessary two points that ensured them of a last eight spot, still with one round of Europe to go.

Although Hogg was left disappointed and not nailing his lengthy, last-gasp kick against his former employers, 24 hours later he was being confirmed as Scotland’s new captain for the forthcoming Guinness Six Nations Championship.

The state-of-the-art, 250-bed hotel will be the latest addition to the Sandy Park business and Rowe himself admitted: “The hotel is going to take us to another level. This is going to be the biggest commercial hotel this side of Bristol – and it’s also going to be Marriott’s only hotel in the area, so they are very excited at what can be achieved.”

With their place in the quarter-finals assured, the Chiefs entered into their final fixture in Pool Two against La Rochelle knowing victory would ensure them of home advantage in the last eight come April.

It’s little wonder, therefore, that Baxter when fully loaded with his team against the visiting French outfit. As it proved, the Chiefs dominated from start to finish, winning 33-14 thanks in the main to scores from Luke Cowan-Dickie, Dave Ewers, Sam Simmonds and Stu Townsend.

“To get a home quarter-final, that’s hugely satisfying,” said Baxter post-game. “Saying that, whoever you play in the last eight of Europe, it won’t be easy. All the sides getting to this stage of the competition will not only be quality, but they’ll be bang on form too. You don’t get to this stage without having quality within your ranks. Whoever we play, it will be a hum-dinger of a game, and a fantastic challenge for us.”

As results panned out over the remainder of the weekend, the Chiefs learnt it would be Premiership rivals Northampton Saints who they would get to tackle when European battle resumed later in the season.

With the first month of the year all but up, it was visiting Sale Sharks who headed to Devon for the return to Premiership action.

Having already lost twice to the Chiefs already in the season, both times in Europe, Steve Diamond’s side were determined to ensure there was no repeat performance in this latest match-up.

Tries from Chris Ashton, Daniel Du Preez and Byron McGuigan helped the visitors storm into a 22-5 lead at the break, after which the Chiefs - who had earlier scored through Phil Dollman - countered with tries from Sam Simmonds and Tom O’Flaherty.

Although pushing hard come the end, the Sharks had bagged enough in reserve to hold on for a priceless victory, a result which left Baxter clearly frustrated.

I’ve actually said to the lads, I’m not going to come into the media here and make excuses, because we don’t need excuses. Listen, I don’t want to say we we’re good enough to win, because Sale are a very good side.

“In all these things, the winning team doesn’t always get enough credit. Instead, you talk about yourselves and what you did wrong. Sale came here today and they did some very good things in the first half. They got some momentum, some strong carries in, and they were on the front foot for much of it. We simply didn’t deal with that!”