We're in the endgame now. It all comes down to this as Exeter's avengers assemble, looking to secure a crucial home semi-final. (2pm)

It's superhero Saturday at Sandy Park and led by their very own captain marvel in Poppy Leitch and captain America Kate Zackary, Exeter know that a victory of any sort will secure 2nd place in the league.

There's a stellar superhero cast on display at Sandy Park, with Westcountry rivals Bristol hellbent on playing the villain, as they too look to secure a home semi-final of their own.

Last weekend, Susie Appleby's side underlined their position as the form side in the league, inflicting a record defeat on table-toppers Saracens. Twelve months ago, a result such as that 54-12 drubbing may have looked like it was a variant out of the multiverse of madness, but it only serves to highlight just how far the Chiefs have risen.

“It was a really pleasing and really complete performance,” smiled the Head Coach. “The most pleasing thing was that we asked the girls to be relentless in their performance and we believe that we were. It’s not just the physical performance, it’s the mindset and the prep that went into that last week.”

The challenge now is to make the sequel as equally compelling, as Appleby’s side look to continue their momentum into Saturday’s clash with the Bears.

“Now, it is about what you can do the following week. How can we replicate that and adjust? We’ve talked about the emotional investment as well. Everyone really enjoyed Saturday, it was a great club day. The crowd, the players and the staff all really enjoyed it. But we’ve got all eyes set on this Saturday. We want that home semi-final.”

Whilst Appleby laughed when admitting she had ‘never been in this situation,’ of fighting for a home semi-final berth, she was adamant that her side needed to continue to grow and improve.

“We’re really pleased first and foremost to make the semi-finals, but we can’t let last Saturday be our final. We have to make sure that we get these next bits right. The next job has to be getting that home semi.”

Appleby and her side won’t necessarily feel like they have failed if they miss out on the home semi-final berth, but the Head Coach acknowledged just how much of a boost playing in front of the Sandy Park crowd would be to her side.

“We’re not going to throw all our toys out of the pram if we have to go on the road, but to stay at home in front of this crowd, would put us in a really good position to maximise our opportunities and try to get to a final.”

There will be no shortage of talent out on the field come kick-off on Saturday afternoon, with more heroes on display at Sandy Park than Marvel can squeeze into two hours of screentime!

Who needs Batman and Robin when the Chiefs have their very own maverick duo of Patricia Garcia and Flo Robinson pulling the strings from halfback!?

Up front, the expected individual battles between Hope Rogers and Sarah Bern, as well as Linde van der Velden and Abbie Ward are a mouth-watering prospect, with both sides evenly matched across the park heading into the clash.

“We know that Bristol will bring a very complete game. They have a powerful back with the likes of Bern and the Welsh internationals. They have good quality players and a very exciting backline,” explained Appleby. “They want to play rugby, which is very similar to ourselves. It will be an interesting game tactically but I’m expecting a decent game of rugby.”

With a near-enough injury free squad to choose from, there have been some tough selection calls for Appleby and assistant coach Steve Salvin, with the entire squad putting their hands up for selection. With great power comes great responsibility and, whilst the Head Coach explained that team selections were becoming all the more difficult, she praised the way that players who missed out had handled the news.

“Everyone understands because we’ve all been on this journey together. It doesn’t make it any easier if you’re not included in the matchday squad, but the best thing about this group is that they are all behind each other. If they aren’t playing, they go up and run the Super Saturday sessions and get the kids running around. It’s great!”

It hasn’t been all plain-sailing for the Chiefs this season on the injury-front, with a spate of injuries to players during the Autumn Internationals forcing Appleby to deploy Zackary in the centres for several matches. Despite what the Head Coach views as ‘several wobbles’ at times, highlighting the away matches with Wasps and Loughborough, Appleby believes that her side have come of age throughout the season.

“It's been tough all season. People have come in and out and we have had injuries. Earlier in the season, we had Kate playing in the centres but now we’ve got our four international centres fit for selection. Since Christmas, we’ve had a few wobbles, but we’ve matured. We’ve got better and we’re continuing to get better, which is what we’re all about.”

There are elements of the game that you can control as a coach, with Appleby hoping to tidy up the lineout this weekend. Much like Peter Parker’s 'spidey sense' though, Appleby’s players thrived on instinct during last weekend’s clash with Saracens, with the Head Coach hoping that her side will approach Saturday’s encounter in the same manner.

“It’s not a learning thing from a book, it’s how it feels on the day. You just can’t coach that; you can only hope that they take it forward and then do it again.”

Heading into the encounter with the Bears, Appleby has named an unchanged 23, keeping faith with the group that did the business last weekend. The Head Coach felt that her side did a lot right against the Londoners and is looking for something similar on Saturday.

“We feel that we got it pretty much spot on on Saturday and we’re hoping to do the same this weekend. It’s down to the players to make it happen. There were lots of bits within the performance that were very good. Our defence was strong and some of our attacking play was incredibly energetic and accurate. It’s those bits that we want the players to keep in their minds and remember.” 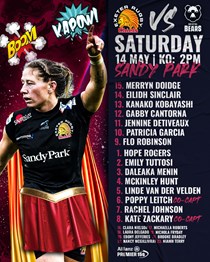