Thomas Waldrom has confirmed he is to leave Exeter Chiefs at the end of the season to return back to his native New Zealand. Picture: @PPAUK

Thomas Waldrom has today confirmed he is to leave the Exeter Chiefs at the end of the current 2017/18 season.

The free-scoring No.8, who has scored 50 tries in 92 appearances for the club to date, says the time has now come for him to return home to his native New Zealand with his family.

His departure after four seasons with the Chiefs will undoubtedly be felt by everyone at Sandy Park, particularly given his outstanding form since arriving from Aviva Premiership rivals Leicester Tigers in 2014, but he insists he still has plenty to play for between now and the end of the season.

“The Chiefs will always be a big part of my life and I’ll definitely come back and visit in the future,” said the 34-year-old forward. “It’s a great place to come and play rugby and I would recommend coming here to anyone who asked.

“From the first meeting I had with Rob, talking to him and seeing where the club wanted to go, I knew I made the right decision. Coming down and seeing first hand everything that was here and what the club did, I knew straight away it was the right fit for me and my family. 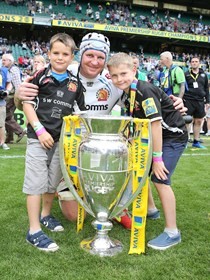 “Never in my wildest dreams did I think the move would go as well as it has, but that’s down to the environment here. The coaches, my team-mates,the fans, it’s been brilliant and I’ve loved every minute of it.

“I also wanted to show people why Rob wanted to sign me when I was 30 on a three-year deal. He showed a lot of faith in me at that time and, hopefully, I’ve helped pay him back a bit over the last few years.”

Indeed, Waldrom has more than proved his worth to the Chiefs, helping the club last season to record a first-ever Premiership title with victory over Wasps at Twickenham.

As he says, the time has come for him, his wife Emma, plus their boys to head home and continue their family life back around many of their loved ones.

“It’s the right time for me to go,” added the England international. “It’s been a hard decision to come to, but deep down I know it’s the right decision. My wife has followed my around England for a good eight years now, when it was only supposed to be two at the start!”

Waldrom insists, however, that he still has plenty to do between now and his departure, namely helping the Chiefs to push on in their Premiership title defence.

“There is still lots to do before I go,” he said. “I know what this team can achieve and, fingers crossed, we can get back to where we were last season come the end of the season. The squad we have, the players within the group, it’s an outstanding bunch who are capable of achieving so much together.

“A lot of what we have done is down to the players themselves, but at the same time Rob [Baxter] and the other coaches do put a lot of responsibility on us as players as well. We do lots of work off the pitch, but when you get things right on the pitch, that’s when they are the first to reward you.”

And it’s that togetherness, particularly amongst the playing group, which Waldrom says is pivotal in the success of the club moving forward.

He continued: “It’s a great environment to be part of as there is always something going on. We do a lot together, on and off the field, and we’ve got things like Cookie Club or we go our for business lunches on our days off. There was Sandwich Club as well, but that’s no more, which I’m pretty pleased about.

“The enjoyment of those sorts of things, the way the boys get on, it all adds to the mix here. There are no egos within the group and everyone is treated the same. The banter in the changing room can be brutal at times, but that just adds to things and makes this easily the best club I’ve been involved with.”

As for the future, Waldrom insists any talk of retirement is very much premature. Instead, he has playing options back home to consider, as well as settling back into familiar surroundings with his family.